Not that the people wearing it will complain – as long as it keeps 'em alive, right? 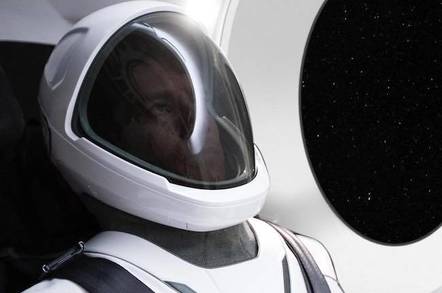 "First picture of SpaceX spacesuit," the billionaire breathlessly wrote in his caption. "More in days to follow. Worth noting that this actually works (not a mockup). Already tested to double vacuum pressure. Was incredibly hard to balance esthetics and function. Easy to do either separately."

Yup, it's a spacesuit all right. It looks pretty generic. We imagine the people wearing it won't care: as long as it keeps them alive and lets them move, that'll be the ticket.

In a Reddit AMA in 2015, Musk said the team was "putting a lot of effort into design esthetics, not just utility" for the garb.

There are several kinds of suits:

At the time of writing, SpaceX was not immediately available to clarify whether the spacesuit is being designed specifically for in-flight travel or also for spacewalks. We also asked for information on the designer.

The future-suit is going to be facing competition from others such as Boeing, who revealed a blue spaceflight suit design in January. ®