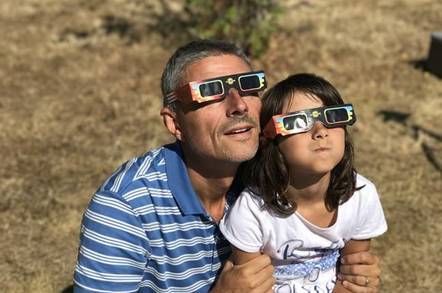 On Monday, millions of Americans watched nature's ballet play out across the Sun (excluding those of us in San Francisco, where we were fogged in). Now an appeal is going out for used glasses to be donated to charity.

Astronomers Without Borders is asking people who bought proper (not rip-off) eclipse viewers to send them in so that they can be shipped off to schools in Chile and Argentina. A total eclipse will move over the two countries on July 2, 2019 and the astronomy organization wants kids in the southern hemisphere to have a safe viewing experience too.

"The response to our glasses donation program has been overwhelming!" said the group's president Mike Simmons.

"We'll have more places to send glasses posted before long, but for now everyone is traveling back from the eclipse. Most importantly, don't throw your glasses away! If you want to collect them from your friends, neighbors, school or anything else, please do!"

Collection centers are being set up around the country to receive, check the efficacy of the glasses – a lot of fakes got sold online before the event – and then ship them down south. In the meantime, if you're desperate to get rid of your sun specs now, send them to:

Alternatively you could hang onto them for the next US eclipse on October 12, 2023 when the west and central US states will get a total blackout. There's another on April 8, 2024 that will travel from the south US up the East Coast.

But let's face it, the chances of keeping a fairly fragile set of solar viewers intact and unlost for over six years, and then finding them again, might be too much. Better to donate them and let other people safely view these stunning solar shade paths. ®

You'll be blinded by science, literally, if you put on fake glasses, boffins warn

African Ring of Fire to show up at annular solar eclipse