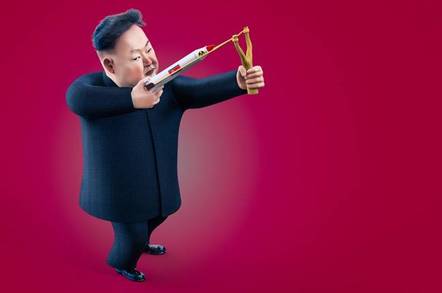 Feature When they said a week is a lifetime in politics, they weren't kidding.

One moment, President Donald Trump talks of "fire and fury," the likes the world has never seen, in response to an increasingly aggressive North Korea, which is trying to menace the US with nuclear weapons.

Then that's shoved to the side by neo-Nazis marching on the streets of Charlottesville, Virginia, resulting in the killing of an antifascist protestor. Then it's back to musical chairs at the White House with Steve Bannon ousted and tech leaders quitting the administration's advisory panel.

One moment, we were all awaiting the warm, so very warm, embrace of all-out global annihilation. The next, it goes quiet. But it's not over. This week, the US and South Korea are carrying out military drills that North Korea claims could lead to "uncontrollable phase of a nuclear war." The Kim Jong-Un-led hermit nation is also hell bent on building an arsenal of nukes despite international resistance, and even its ally China is urging it to calm down.

So, what can the Norks actually achieve: do they have working nukes, and can they reach the US? Realistically, the chances of either North Korea or the US slinging missiles at each other are slim. China says it will retaliate if America launches a preemptive strike against North Korea, filling the skies with warheads aimed at US cities. So it's, as we say around here, suboptimal even for Trump to wipe North Korea off the map. However, China said it will take a neutral stance if the US responds to a Nork launch, so it would be pure suicide for Kim Jong-Un to try to hit America. And he doesn't want death, well, not for himself: he wants sanctions lifted and respect from world leaders.

And whatever happens, if North Korea is going down, it's taking South Korea with it. And no one wants the blood of Seoul on their hands.

Having said that, North Korea has, allegedly, perfected a nuclear device small enough to fit in one of its intercontinental ballistic missiles, and has test fired a few of these rockets without them exploding en route.

However, experts are still skeptical that North Korea has the ability to successfully lob a nuke all the way to the American mainland. While its rockets work some of the time, and even accepting reports that they have a nuclear bomb that can fit inside a missile, there are still hurdles to overcome – chiefly reentry and targeting.

After its boost phase, an ICBM will travel through space and then reenter the atmosphere. That's a really tough process, because it involves compressing the air around it at such a rate that it quickly heats up the rocket. Without a nose cone capable of withstanding these temperatures, and there appears to be no sign of one on Nork missiles, the bomb would burn up before it could detonate. There's also the slight possibility that Uncle Sam's missile shield might actually work and shoot down Kim Jong-Un's package.

So far, the answer to the question, can North Korea reach California with a rocket, is: probably possibly. Can it actually survive reentry and nuke the Golden State? Maybe.

But there is another option for the North Koreans, and one that could possibly do far more damage than a single nuclear strike. Before reentry temperatures kick in, the bomb could be detonated in the upper atmosphere – and the electromagnetic pulse (EMP) generated would potentially do more damage than a single missile could ever manage. Successfully emitting an EMP blast over the US West Coast, with Silicon Valley within its grasp, or further inland, would be extremely bad news for our future on this planet.

In other words, Kim Jong-Un doesn't have to strike America, setting off a cliched mushroom cloud: using EMP high in the skies to wreck our electronics and communications could be, potentially, enough to upturn society and put us on the path to global thermonuclear war.

When a nuclear weapon is detonated it doesn't just generate the massive ball of fiery destruction we're all familiar with, but also three distinct levels of electromagnetic pulse.

The electromagnetic pulse (or "radioflash," as the British called it) generated by a nuclear explosion has been known about since before the first Trinity test in 1945. It was an annoying side effect but could easily be protected against.

However, in the 1960s the US and the Soviet Union began to consider the offensive uses of EMP. In 1962 both sides began detonating atomic bombs in the upper atmosphere and recording the effects on the ground.

On the US side, the Starfish Prime test on July 9, 1962 detonated a 1.4 megaton bomb 250 miles up over Johnson Island in the Pacific. It caused electrical damage on Hawaii 1,400 miles away, crippled eight satellites, and killed three of them stone dead. War planners took note.

While Hollywood fiction usually depicts the start of a nuclear war with masses of rockets firing off, in fact the first sign of war would probably be power failures and electronics temporarily freaking out. Both sides had war plans that called for the first detonations to take place in the upper atmosphere, generating a massive EMP that would hopefully stun or cripple the enemy and reduce their ability to retaliate and recover.

Testimony to the US Congressional EMP Commission stated that in the event of a massive EMP attack on the US using multiple high-yield warheads, around 90 per cent of the American population would be dead after 18 months due to famine, disease, and societal breakdown.