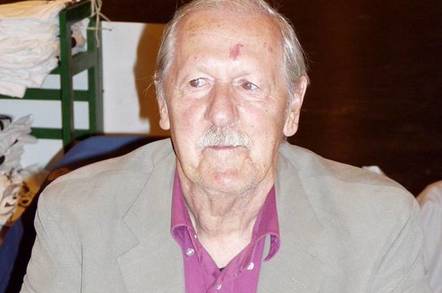 Obit Brian Aldiss OBE, one of the most popular and prolific science fiction writers of his generation, has passed way at his home one day after his 92nd birthday.

Aldiss published an enormous number of science fiction books and short stories – as well as non-fiction work – but is perhaps best known for the Helliconia trilogy and his short story Supertoys Last All Summer Long, which was used as the basis for the 2001 film AI Artificial Intelligence.

"A friend and drinking companion of Kingsley Amis and correspondent with CS Lewis and JRR Tolkien, Aldiss was a founding member of the Groucho Club in London and a judge on the 1981 Booker Prize," said his publisher in a statement.

"Awarded the Hugo Award for Science Fiction in 1962 and the Nebula Award in 1965, Aldiss's writings were well received by the critics and earned a strong following in the United States and in Britain, as well as being widely translated into foreign languages."

Born in 1925, Aldiss began writing stories as a four-year old child, encouraged by his parents. He saw action in Burma during the Second World War and afterwards moved to Oxford and worked in a bookshop.

He came to a publisher's attention after publishing a fictional tale of life as a bookseller in 1955 that did reasonably well, and was already writing science fiction short stories for magazines. After being commissioned for his first book of short stories, Aldiss began a career which spanned more than half a century and triggered the New Wave movement in British science fiction.

"I actually think that the great days of science fiction have perhaps passed now," he told Desert Island Discs in 2007. "But the fact is science fiction gave me an umbrella, and it gave me endless friends who are still my friends. I would never knock science fiction, I think it's splendid."

His skill was recognized early on, and he picked up his first Hugo Award (the Oscars for SF) for the Hothouse series in 1962, a second in 1987 for Trillion Year Spree, and a Nebula award in 1965 for The Saliva Tree and Other Strange Growths. The Helliconia series also brought the highly valued John W. Campbell Award.

His short story Supertoys Last All Summer Long was very popular in the US and was optioned by film auteur Stanley Kubrick in the 1970s. The two collaborated on a script for years, before Kubrick fired him in 1985, but the film did finally get made by Steven Spielberg.

Aldiss said that he wasn't keen on the happyish ending that Spielberg tacked onto the film, but that was just his personal view. He said that the story of the unloved robot child David was inspired by his own difficult relationship with his severely depressed mother growing up.

Aldiss carried on writing almost until his death, and some of his work will be published posthumously. He married twice and is survived by four children. ®