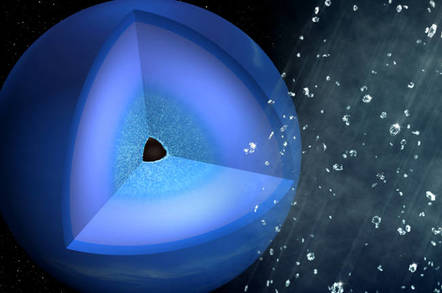 Researchers from Stanford have shown how the frigid, high-pressure atmospheres of the planets Uranus and Neptune can create a "rain" of diamonds.

The team from the SLAC National Accelerator Laboratory says it used an optical laser from the Matter In Extreme Conditions instrument to demonstrate how, deep within the gas giants, high pressure can bond hydrogen and carbon atoms to create nanometre-wide "diamonds" that fall through the dense atmosphere.

"Previously, researchers could only assume that the diamonds had formed," said Dominik Kraus, who is the lead author of the report and a scientist from Helmholtz Zentrum Dresden-Rossendorf in Germany.

"When I saw the results of this latest experiment, it was one of the best moments of my scientific career."

When the scientists blasted polystyrene plastic (which has a chemical makeup similar to that of ice giant's atmosphere) with a laser, they were able to create shockwaves that briefly formed tiny diamond crystals measured to be just a few nanometres wide.

The results of the experiment show that the formation of the diamond crystals is in fact possible within the two outer planets. The structure of the methane atmosphere combined with the high pressure of the gas giants suggests that at depths of around 5,000 kilometres into the atmosphere, the tiny diamonds are forming and then slowly falling through the gasses as a "slush" that eventually settles around the core of the planets, generating heat in the atmosphere in the process.

"With planets, the relationship between mass and radius can tell scientists quite a bit about the chemistry," explained Kraus. "And the chemistry that happens in the interior can provide additional information about some of the defining features of the planet."

Add the observation to the growing list of odd features present in the outer gas giants. Earlier this year, astronomers found that Uranus also exhibits bizarre fluctuations with its magnetic fields and may have a pair of hidden moons. ®