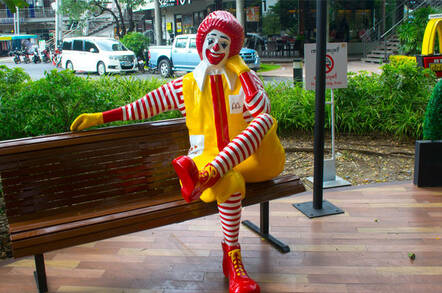 An irate McDonald’s drive-thru punter was so pissed that he couldn’t get his Sunday morning ice cream fix due to a broken dispenser that he pulled out a replica AR-15 rifle from his car boot in protest.

A BMW driven by Michael Delhomme arrived at the fast food destroyer of diet’s drive-thru intercom at the Delray Beach branch in Florida before noon on 13 August, with Jerry Henry in the passenger seat.

All was well until the request for frozen dairy goodness was left unfulfilled and Delhomme voiced upset “because ice cream could not be served to him as the ice cream machine was not operational,” the probable cause affidavit stated (via Smoking Gun).

According to McD worker Devan Wright, Henry then jumped out of the vehicle and took out “what clearly appeared to be a long barrel firearm” from the boot of the car (more familiarly known as a trunk to our US cousins).

When the boys in black arrived on the scene Henry informed them that Delhomme had asked him to pull the “stick” from the boot after the “altercation over ice cream”. Henry admitted “placing it between his legs in the front seat”.

The entire spat was caught on McD’s CCTV footage, and as a result Henry was charged with improper exhibition of a dangerous weapon and is expected to enter a plea on a misdemeanour charge. Delhomme was not charged. ®

You know where Apple Pay is getting used a LOT? Yes - McDonalds

Would you like to supersize that molten plastic? (the toy, not the cheeseburger)

Fancy an ebook with your Big Mac?

Hot muffins on the menu as staff 'concentrate on serving customers'

Snatched just in time for the Olympics