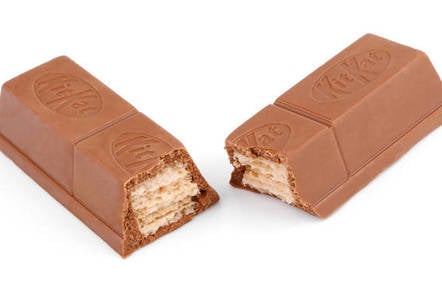 Atari has sued Nestle, accusing it of "blatantly" impinging on its intellectual property by featuring the 1970s video game Breakout in a Kit Kat ad without its permission.

In a lawsuit filed yesterday in San Francisco, California, the games biz accused Nestle of "blatant invasion and misappropriation of its intellectual property rights related to the iconic Breakout video game."

The game was developed by Steve Jobs and Steve Wosniak in 1975, following Atari's hit game, Pong. Jobs said the $5,000 he was paid for Breakout served as seed money for his nascent company, Apple.

"Forty years later Nestle decided that it would, without Atari’s authorisation, leverage Breakout," read the filing. "To be clear, this is not a case where a good faith dispute could exist between the rights holder and alleged infringer.

"Adding insult to injury, Nestle’s Breakout campaign was comprehensive, and the infringement continues to this very moment. Kit Kat ads centred on the exploitation and misuse of the Breakout name, and the Breakout look, feel, sound, and imagery remain on Twitter, under Nestle’s Twitter handle, and on Facebook, on Nestle’s Facebook page, for all the world to see."

The filing said that Nestle has denied Atari the licensing fees it would have charged Nestle for use of Atari’s intellectual property in the widely distributed Kit Kat Breakout campaign, had Atari agreed to such use.

Nestle said: "This is a UK TV advert that ran in 2016. The ad no longer runs and we have no current plans to re-run it. We are aware of the lawsuit in the US and will defend ourselves strongly against these allegations."

You can watch the TV ad here. ®

* Sub-vulture pedant note: Really, one should use two words here for the verbal phrase "break out"; it's only a Breakout – or even B/break-out – when it's a noun. Subs' desk has no comment on the merits of the lawsuit, but this is a pretty egregious violation of grammar.