Even limited board reports now scrapped in favor of worthless 'updates' 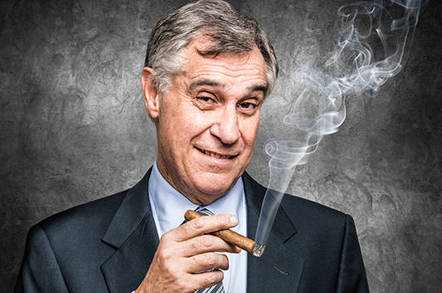 The operator of the .uk top-level domain, Nominet, has become the latest internet registry to vote itself into greater secrecy.

Earlier this year, the biz emailed its members to let them know that a month earlier the Nominet board had decided that it would no longer publish minutes of its meetings but instead supply an "update" in the organization's bi-monthly newsletter.

The move followed a similar decision to decrease organizational transparency and accountability by Australia's .au operator, auDA – a decision that ultimately led to its chairman resigning at the end of July following a member revolt.

As a result of the unexpected decision, Nominet has not only stopped producing board "communiqués" but has also stopped posting the reports it uses to make decisions. The result is that members are almost entirely blind as to what the company is planning to do with the tens of millions of pounds it makes from .uk domain holders.

Nominet was already held in low regard when it came to accountability, thanks in large part to a decade-long campaign by senior management to minimize the influence of its members.

The board's communiqués – so called because they repeatedly left out agenda items and details of discussions that would be expected in actual "minutes" – have long been regarded as largely useless. Here's an example of one.

However, even that limited amount of detail has now been removed, including – as some members have noted – the removal of any notices with respect to conflicts of interests between board members and any decisions made by the board.

When members were informed a month after the fact that Nominet would no longer produce communiqués, they were pointed to a "company update" for details of that meeting. The three-paragraph update doesn't even mention the decision that the company would not post any more board communiqués or reports.

Worse, Nominet has given no indication that it will archive the "company updates" and has said that it will simply update the webpage on which updates are held every two months, prompting one critic to set up a website to archive previous "updates."

The same effort to hide its activities from its own members sparked an enormous backlash from members of Australia's .au registry. But so far there has been little organized effort to force Nominet to reconsider.

That is likely a result of the long and unpleasant fight that took place at Nominet as its management attempted to shut out critics of its decisions, and which resulted in several heavily contested elections and shouting matches at its annual general meetings.

The reality is that due to Nominet's unusual voting structure, the organization is effectively controlled by a very small number of large internet registrars who between them have a controlling stake in what is supposed to be a non-profit organization focused on the interests of all UK domain holders.

Despite its founding charter highlighting the need for Nominet to act "in the public ,benefit" its current management have decided that that means providing money to good causes through the Nominet Trust. As such, the more money Nominet makes – part of which it sends through to its trust – the more the organization claims it is carrying out its public benefit requirement.

This is literally nothing that ordinary members and .uk domain owners can do to force the organization to change that direction since any efforts can be voted down by a handful of CEOs: a situation which those executives – some of whom sit on the board – are all too aware of.

Not gonna. You can't make me

Even after years of in-fighting, the Nominet board still refused to listen to an independent review that it had itself commissioned in which it was told to restructure itself to give members a greater say and to stop interfering in elections.

In recent years, Nominet has increasingly followed a profit-making and expansion strategy that has little or nothing to do with .uk domain holders and or the UK's internet. Most galling for domain name holders is that that expansion is being funded by Nominet's main revenue stream: annual renewals for .uk domains.

In November 2015, Nominet unexpectedly and unilaterally increased .uk domain name wholesale prices by 50 per cent – from £2.50 to £3.75 per year – to deal with "additional costs."

As we noted at the time, a significant part of those extra costs came in the increases in wages and remuneration that Nominet's staff and board had voted to award themselves.