Consultant was all too app-y to break law, claim investigators 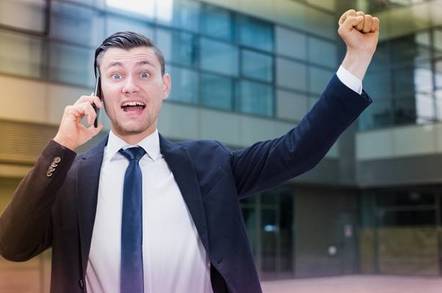 A banking IT expert orchestrated an insider-trading caper that raked in millions of dollars for him and his pals, it was claimed on Wednesday.

Between August 2013 and April 2017, Daniel Rivas, 32, worked for an unnamed New York bank in its capital markets technology division. He was hired as a consultant for a new banking application and, according to US authorities, he allegedly used his privileged access to servers and email systems to run an insider-trading ring.

It's claimed Rivas had access to, and exploited, highly confidential details on hundreds of pending business deals, giving him an edge on announcements yet to be made public.

Rivas, of Hasbrouck Heights, New Jersey, is accused of passing insider knowledge to his girlfriend's father, one James Moodhe, 60, of New York City, who then used it for trading stocks on 25 companies. US financial watchdog the SEC estimates Moodhe amassed about $2m in profit over the three years he was getting information from Rivas.

Being a techie, Rivas understood the nature of digital evidence and did not communicate with Moodhe online. Instead, the SEC claims, he wrote out share tips by hand and gave notes for his girlfriend to pass on to her dad.

Initially, it is alleged, Moodhe just invested in the stock of firms that were going to be taken over, but, as the profits mounted, he started moving into option trading to maximize his returns, the SEC said. He also shared some of the tips with his friend Michael Siva, 55, of West Orange, New Jersey, who was a financial adviser.

Siva is accused of using inside information on at least 13 stock trades from both his own trading accounts and for his clients. These netted him around $8,000 in profits personally, but his clients made over $1.18m over two years of trading, the SEC claims.

Knowledge wants to be free

When not currying favor with his girlfriend's dad, Rivas is also accused of passing tips to two friends in Florida: Roberto Rodriguez, 32, of Miami Gardens, and Rodolfo Sablon, 37, of Miami, the SEC claims. Notes passed hand to hand wouldn't be possible given the distance from New Jersey to Florida, so the trio are accused of collaborating via an unnamed app that encrypts messages and then destroys them after they were read.

In December 2015, Rivas met the two and planned to use his insider knowledge to allow the duo to set up their own brokerage business, it is claimed. Rivas would then join as a customer and benefit from their success, it is alleged.

Neither Rodriguez nor Sablon were experienced traders, but they began making larger and larger bets on stock movements, all of which hit the jackpot, the authorities claim. That's the kind of situation that sets off alarm bells in the minds of regulators – for instance, the newbies realized $2m in profit from a $100,000 investment, it is claimed.

The two did attempt to cover their tracks by writing phony research reports to make it look like they were relying on public info, and set up shell companies for trading, it is claimed. Sablon established The Odin International Group while Rodriguez created Blackbourne Financial Group, and these companies opened accounts to trade on the tips the duo were allegedly getting from Rivas.

The SEC says that by 2016 Rodriguez was also sharing the tips with another, unnamed friend, who realized some good profits of his own – $67,000 according to the SEC.

The third and final alleged conduit for insider information was Rivas' childhood friend Jhonatan Zoquier, 33, of Englewood, New Jersey. The SEC claims that Rivas passed on stock tips to his buddy – as well as buying him an engagement ring for a marriage proposal to his girlfriend – and this information netted over $30,000 in illicit profits.

Following a pattern, Zoquier is accused of passing the same stock information on to his friend, Jeffrey Rogiers, 33, of Oakland, California, who used it to make over $50,000 in profits from trading, it is alleged. The SEC claims Rogiers also passed on the information to two other friends who made over $400,000 from trading.

The SEC's formal charges against the above were filed in the Southern District of New York on Wednesday. The watchdog accuses Rivas, Moodhe, Rodriguez, Sablon, Zoquier, Siva, and Rogiers of violating Sections 10(b) and 14(e) of the Securities Exchange Act of 1934 and Rules 10b-5 and 14e-3. It wants the money from the illicit trades, with interest, back, and prison time may be on the cards if they are found guilty. ®

Bucharest's Bayrob boys blasted based on bogus buys, Bitcoin banditry, bound to be behind bars