President Trump to his council of industry CEO buddies: You're fired!

Don't worry, Donald – Dell-EMC-VMware-RSA still has your back 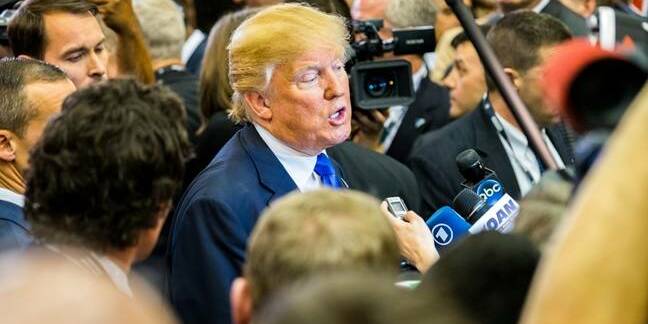 In the days after the Charlottesville white-supremacist rallies and the President's initial tepid condemnation of those marches, the leaders of corporations including Merck, Intel, and Under Armor resigned in protest from Trump's council.

Yesterday, the President sparked further outcry with an unhinged press conference that was said to have left even his own staff stunned. During the Q&A in Trump Tower, the President of the United States said there were "very fine people" in both the fascist marching groups and the anti-fascist counter-protestors on the streets of Virginia at the weekend.

In the wake of that debacle, even more execs on the manufacturing council jumped ship as the heads of the AFL-CIO labor union, the CEO of industrial company 3M, and the boss of the Campbell's Soup company stepped down.

Those withdrawals proved fatal to the group, and on Wednesday morning, just one day after saying he had "many" CEOs wanting to join the manufacturing council, Trump said his panel was fired. He also closed down his strategy and policy forum, although the CEOs in that group had already secretly agreed to disband anyway.

Rather than putting pressure on the businesspeople of the Manufacturing Council & Strategy & Policy Forum, I am ending both. Thank you all!

Not everyone, however, is abandoning the Trump administration over the President's comments. IT giant Dell, whose founder Michael Dell sat on the President's manufacturing council, pledged its loyalty last night amid the rash of resignations, saying it would still work with the White House.

"While we wouldn’t comment on any council members’ personal decisions, there’s no change in Dell engaging with the Trump administration and governments around the world to share our perspective on policy issues that affect our company, customers and employees," a Dell spokesperson told The Register.

No doubt the lure of continued lucrative government IT contracts for Dell, EMC, VMware and EqualLogic were also a consideration.

Meanwhile, debate also rages on about one of the groups at the center of the controversy. White supremacist site Daily Stormer was dumped earlier this week by internet hosting outfits GoDaddy and Google. Its server at Paris-based Scaleway was also shut down. The website found a new home with a .ru domain name and Cloudflare for DNS, proxying and DDoS protection.

Though California-based Cloudflare initially stood by its hosting of Daily Stormer on free-speech grounds, the web giant today terminated the site's account, knocking it offline. ®

The Stormer's .ru domain has been suspended, according to Radio Free Europe. The site is now a .onion hidden service on Tor.