Club Lust bathroom shootup in, you guessed it, Florida 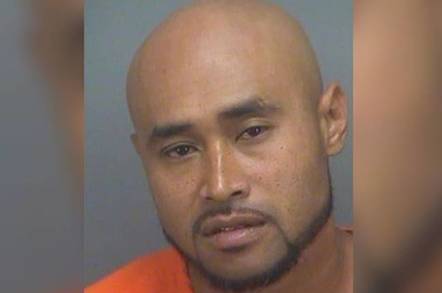 A Florida man has been sent to prison for six years and five months after he shot up a strip club toilet while taking a selfie.

In December, patrons of Club Lust in St Petersburg, in America's Sunshine State, were startled to hear the sound of gunfire in the men's bathroom. A .40 caliber round shattered one of the mirrors in the gents, punctured the wall and whizzed into the ladies facilities, harming, luckily, no one. The sound was followed by a man scuttling out of the restrooms.

“It was an accident, man. I was just trying to take a selfie,” Rorn Sorn, 34, told security guards before leaving the establishment.

The police were called and found Sorn, a reputed member of the local Asian Pride gang, a block away from the strip club displaying "two obvious bulges" in his trousers, according to court documents [PDF]. Before administering a pat down, the cops asked if he was carrying a weapon and he replied:

"Fuck, yeah I do, it's in my pocket man! It's my friend's, he has a license to carry it," before adding: "It was an accident man; I didn’t know it was going to go off."

The officers pulled a Interarms Firestar .40 caliber handgun from his front right pocket and a magazine from his left. They also found some Xanax pills and a small amount of marijuana. He was cuffed and read his rights.

In an interview at the police station, Sorn explained that he didn’t realize the gun was loaded, and again the discharge had been an accident. He said he was "trying to take YouTube and Facebook videos inside the club when: boom, it went off."

The plod did a background check and found that Sorn had been prior convictions for home burglary and attempted first-degree murder, and as such wasn't allowed to own a firearm. Furthermore an examination of the weapon's serial number found it had been illegally shipped across state lines.

As a result Sorn was charged with possessing a firearm as a convicted felon, but not for shooting up the bathroom. He pleaded guilty on April 24, and was sentenced by US District Judge James Whittemore on Monday in a Tampa court. ®

Moved more than 40,000 fake iStuffs while on student visa