Watchdog admits it's a legal minefield 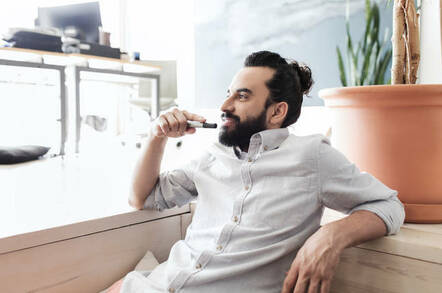 Comment The UK's advertising watchdog says that generic lifestyle campaigns urging people to improve their health by vaping instead of smoking may fall foul of EU law.

The Advertising Standards Authority (ASA) today upheld an anonymous complaint made about an advert for a e-cigarette shop Vape Station, in the magazine The Journal. After intense lobbying from the pharmaceutical industry, the EU's Tobacco and Related Products Regulations 2016 (TRPR) monitored less harmful tobacco substitutes like e-cigarettes as if they were tobacco products. The rules therefore ban the promotion of vaping product brands in a newspaper or magazine, unless it's a trade-only publication.

In this instance, both the publisher and the advertiser argued that no brand was identifiable. The ASA pointed to the section 22.12 of the Committee of Advertising Practice (CAP) code and confirmed that it "reflects the TRPR except for ads targeted directly at the trade". The new rules came in on February 1 with guidance (PDF).

However, one word has a far-reaching effect. The TRPR's use of the word "indirect" could ensnare governments seeking to promote vaping as an alternative to the much more dangerous habit of tobacco combustion.

"The law is even worse than this ruling implies. Even a generic appeal to smokers to switch to vaping would contravene the new EU Tobacco Products Directive," claims Christopher Snowdon, director of lifestyle economics at the Institute for Economic Affairs. "If the UK government ran a stop-smoking campaign on television that encouraged vaping, it would be breaking the law. It's an absurd state of affairs."

The ASA was more cautious. "It's still a legal minefield, but watch this space," a spokesperson told The Register, adding that the ASA would likely consult on clearing up the issue.

So why is the catch-all prohibition on "indirect" promotion included? Reading the guidelines, it appears that Brussels lawmakers were anxious about the "stealth" advertising of vaping gear. For example, they didn't want to create a loophole that would permit nicotine-capable devices being promoted using zero-nicotine liquid. In other words, they were more concerned about non-nicotine users being drawn to vaping products which may have a dual use, rather than promoting vaping as a safer alternative to smoking.

There are indications that the government may liberalise the law after Brexit, killing off TRPR. Its Five Year Tobacco Control plan seeks to "maximise the availability of safer alternatives to smoking", including e-cigs. It would be hard to fulfil that policy goal yet retain the draconian regulation of e-cigarettes as a tobacco product.

Having lost the scientific (and moral) arguments against e-cigarettes, opponents are using guerrilla tactics – like the ASA's anonymous complaints process – to hinder the market. ®