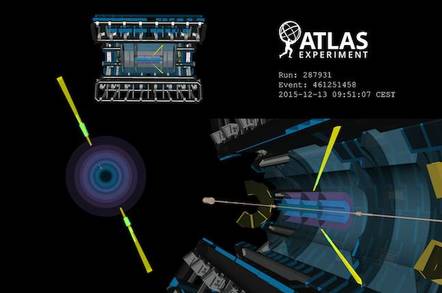 Large Hadron Collider boffins in charge of the ATLAS experiment reckon they've seen photons interacting at the quantum level for the first time.

This isn't something that happens at everyday energies: if, for example, you shine two beams through each other in a dark room, you'll see two spots on the wall.

However, direct interaction between photons is a prediction of quantum electrodynamics, so naturally enough, boffins are pleased as punch to identify evidence that it can happen.

CERN explains that the phenomenon happened during experiments in the organisation's ATLAS experiment, in which they fired high-energy lead ions at each other.

The University of Sheffield's Dan Tovey, ATLAS Physics Coordinator, calls the experiment “the first direct evidence of light interacting with itself at high energy.”

As the CERN announcement notes, the accelerating groups of lead ions create “an enormous flux” of photons surrounding them.

What the researchers spotted was that some of those photons interacted and scattered off each other, in what the announcement calls “ultra-peripheral collisions”.

As is so often the case in high-energy physics, you need an awfully big haystack to deliver up any needles at all: four billion events in 2015 yielded up just 13 candidates for light-by-light scattering at 4.4 standard deviation significance.

More LHC heavy-ion experiments are planned for 2018, which should improve the precision of the observations. ®