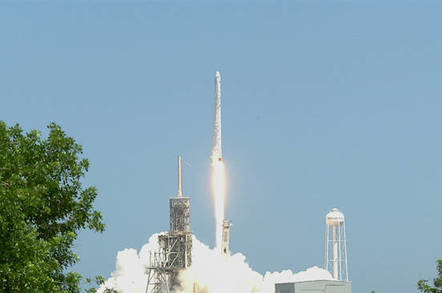 Hitching a ride on SpaceX's 12th commercial resupply mission to the International Space Station is NASA's latest tech for studying the origins of cosmic rays, the high-energy particles that bombard Earth from deep space.

Victor Hess, an Austrian physicist, is credited with discovering cosmic rays during a balloon flight in 1912.

NASA and the US Department of Energy strapped a cosmic ray detector called the Alpha Magnetic Spectrometer to the International Space Station in May 2011 and, according to boffins, it has already recorded over 90 billion cosmic ray events.

There are several other cosmic ray detectors in space and even on the ground – such as the Pierre Auger Observatory in Argentina – optimised to examine different things. Another cosmic ray experiment attached to the ISS is the CALorimetric Electron Telescope instrument, which tracks electrons and gamma rays.

Soon NASA will add the Cosmic Ray Energetics and Mass Instrument (CREAM) to the list. On Monday, a SpaceX Dragon spacecraft lugging the gear lifted off from Florida's Kennedy Space Center on a Falcon 9 rocket.

It will measure the charges of cosmic rays – from hydrogen through iron nuclei – over different energy ranges. The goal is to answer some outstanding questions about their history: for example, do supernovae supply most cosmic rays?

CREAM has already been launched from six balloon flights to heights of about 40km over the Antarctic during the summers between 2004 and 2010, but boffins want to get it even higher to avoid interference from the Earth's atmosphere. They estimate it will gather 10 times more data than before.

Other experiments aboard the Dragon spacecraft include a tiny microsatellite with a telescope to help test the practicality of low-cost weather and natural disaster tracking, as well as an experiment to grow a protein linked to Parkinson's disease (backed by the Michael J Fox Foundation, Anatrace and Com-Pac International).

The spacecraft will reach the ISS tomorrow, August 16, when NASA and ESA boffins will use the stations robotic arm to catch it. ®