Chap behind Godwin's law suspends his own rule for Charlottesville fascists: 'By all means, compare them to Nazis'

We did Nazi that coming 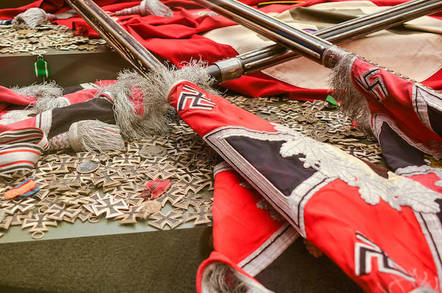 Mike Godwin, creator of Godwin's law, has rescinded his own rule for those outraged by vile fascists marching the streets of Virginia, USA, at the weekend.

In other words, it's OK to call these un-American white supremacists exactly what they are: "By all means, compare these shitheads to Nazis. Again and again. I'm with you," Godwin said on Sunday evening.

Godwin's law states that "as an online discussion grows longer, the probability of a comparison involving Nazis or Hitler approaches one." The unofficial extension of this is that the first person to bring up Hitler automatically loses the argument.

Godwin created the aphorism in the early 1990s, when he was the first in-house lawyer for the EFF. It was created partly as a humorous aside on bulletin board behavior and partly as an exercise in mimetics and to encourage people to read more history. More than 20 years later it's still cited online.

In the wake of white supremacist rallies in Charlottesville, Va., over the weekend, which left one protestor dead and 30 injured, Godwin has, at least in this case, suspended his own law – or, rather, granted permission to break it. This comes after a plea from a fan online for him to respond to the scenes of fascists in America's streets.

"Your adage is invoked so very often to shut down discussions about politics and social issues as soon as any comparisons to Nazism and 1930s Germany are made, but now that videos have surfaced showing the Nazi flag being waved in the Charlottesville parade," one netizen wrote on Godwin's Facebook page.

"Sir, would you please make a public statement? I've noted before that sometimes sheer irony can pierce to the heart of an argument, to deflate the opposing side."

The attorney's response was quick and to the point. When talking about white supremacists and their supporters, the four-letter N word is back in play.

By all means, compare these shitheads to Nazis. Again and again. I'm with you.

Certainly anyone watching the weekend's rallies in Charlottesville would have difficulty not describing the protestors as Nazis – given the swastikas and Heil Hitler salutes on display. While the marchers themselves prefer terms like alt-right or true patriots, it's clear the rest of the country and world would rather call a spade a spade when they see neo-Nazis march. ®

PS: This anti-fascist movie, made by the US military in the late 1940s, could not be more timely. A shorter cut is below.

Team Trump goes in to bat for Google and Facebook