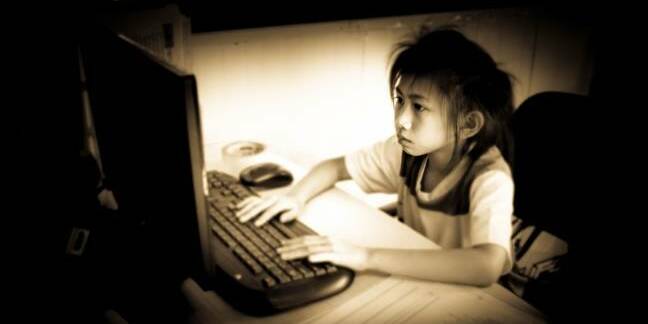 Poor little mite ... An artist's impression of an internet-addicted kid

Staff at one of China's internet addiction clinics have been arrested after a teenager sent there for rehabilitation was found dead after 48 hours.

The 18-year-old was sent to the camp at the turn of the month by his parents who were in despair at the amount of time he was spending online. The center in in Fuyang city claims to use "psychological counseling and physical training" to wean Middle Kingdom netheads off cyberspace and lure them back into the offline world.

However, after two days in the facility, his parents were called and told that he had been taken to hospital, it is reported. He died in the ward, and doctors said they found over 20 external injuries on his body and some internal injuries, too, it is alleged.

"My son's body was completely covered with scars, from top to toe... When I sent my son to the center he was still fine, how could he have died within 48 hours?" his mother, with the surname Liu, was quoted as saying in Anhui Shangbao, the BBC reports.

According to the state broadcaster CCTV, the center has now been shut down and the director and four staff have been taken into custody. An investigation into the youngster's death is ongoing.

The case has highlighted the continuing difficulties the Chinese authorities are having battling internet-hooked citizens. The government has tried to recruit parents to the fight by giving them the power to instruct ISPs to limit access to certain times.

Over the past few years, both government-run and private internet addiction boot camps have sprouted to meet the demand from anxious moms and pops looking to drive their kids offline. Approaches on this vary from physical exercise and counseling to electro-shock conditioning.

Alternatively, parents could just chill out a bit. After all, it's not as though Linus Torvalds, Mark Zuckerberg, or Larry Page would have had the careers they have if they were forced to take time out from the computer and go outside for some fresh air. ®