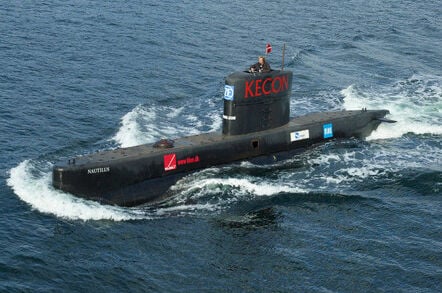 One of the world's only privately built submarines has reportedly sunk under mysterious circumstances on the Danish coast.

The 33-ton diesel-electric boat, UC3 Nautilus, is said to have foundered after getting into difficulty in Køge Bay, around 25 miles southwest of Copenhagen.

Prominent Swedish newspaper Aftonbladet wrote that the boat was reported missing after it failed to return to Copenhagen harbour as scheduled. This prompted a search by the Danish Navy.

While the navy apparently found the Nautilus and her captain, Peter Madsen, on the sea's surface, it appears that the boat foundered shortly afterwards as a result of "technical problems", judging by other accounts.

One Swedish journalist aboard the submarine who was reportedly put ashore before the boat ran into trouble has not yet been accounted for, according to Danish newspaper Berlingske. Bloomberg News reported that Madsen told a local TV station about the sinking, revealing that a problem with a ballast tank caused the crowdfunded vessel to sink.

Ballast tanks are used to dive and surface a submarine by changing its buoyancy. When the tanks are filled with water, the submarine sinks; when they are pumped out with compressed air, the sub rises.

"It took about 30 seconds for Nautilus to sink, and I couldn't close any hatches or anything," Madsen was reported as saying. "But I guess that was pretty good because I otherwise still would have been down there."

The Nautilus itself was launched in 2008, having been built by Madsen and a group of friends. The Wikipedia entry for the boat appears to have been written by someone familiar with the Nautilus's design and systems, judging by the level of detail. While her theoretical crush depth is given as "400m-500m", this seems a tad optimistic. Proper naval submarines tend to operate at these levels, and the 18-metre Nautilus is far smaller than those.

The boat was reportedly equipped with a fully functional snorkel system as well, allowing her to use her diesel engines for propulsion while submerged just below the surface. Her maximum speed was given as a stately 9 knots. A few years ago a crowdfunding project to raise $50,000 for a refit fell well short of its target.

The Nautilus was unarmed, though was reportedly well equipped with video cameras and portholes for observation. She was relaunched in April this year after a six-year refit, if Wikipedia is to be believed.

Private submarines, as distinct from submersibles used for scientific research and the like, are vanishingly rare. The traditional size and hull form of submarines is driven by their need to carry armaments, sensors and a crew to operate them; the size is simply not necessary when you don't need half a dozen torpedo tubes in the bows and stern of your boat, or a ballistic missile compartment in the middle of it. Scientific and private submersibles, as a result, tend to resemble crabs with bulbous heads rather than missiles.