Hey America! Your internet is going to be so much better this January

But probably not in the way you'd hoped 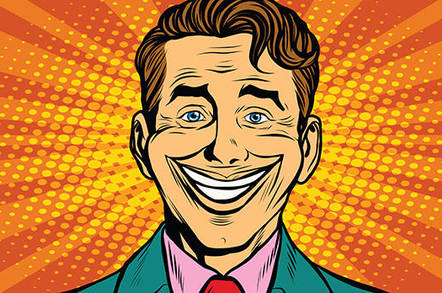 Special report In the last week of January, America's internet is going to get a long-awaited boost. More Americans than ever are going to have access to fast internet as well as a greater choice of providers.

What's all the more amazing is that this improvement will come without requiring any extra investment by broadband providers and without anyone needing to pay more or even change their plans or provider.

How is this possible? Simple: the Federal Communications Commission is going to redefine how it measures internet access. No need for expensive network upgrades or new policies to encourage greater competition: the US broadband regulator will simply change its mind as to what internet access is. Brilliant.

In a notice of inquiry put out this week, the watchdog proposed reviewing its methodology when it comes to writing up its annual Broadband Progress Report.

The 21-page notice [PDF] is virtually designed to be impenetrable to anyone but the small cohort of telecoms policy wonks, but overall there are two major changes proposed:

To which the answer should be No and No. But which the FCC will decide Yes and Yes after it has run a sham public comment process.

Why does it matter and what's really going on here?

So if you decide that "internet access" covers both fixed line and mobile then suddenly a huge percentage of the country gains access to "fast" internet access. Not only that but competition in the market suddenly jumps too because there are more providers. And all without a single thing actually happening on the ground.

This, of course, ignores the fact that people use fixed line and mobile access in vastly different ways. No one watches HD video on their phone if they can avoid it – they watch on their flatscreen. No one tethers their laptop at home to their mobile phone if they have a Wi-Fi connection. But the FCC is planning to ignore reality because it will result in cable companies looking better than they are.

The FCC also suggests defining "broadband internet" using the speeds offered by ISPs. In other words, rather than setting the bar at 25Mbps, the regulator will consider, say, 10Mbps as broadband because, hey, that's what folks pay for. That simply hands control of what should be independent government requirements to the cable giants. Comcast and co would be immediately incentivized to have customers adopt whatever speeds make financial sense for the ISPs.

So you can find that suddenly your slow but cheap 3Mbps is upgraded to 10Mbps for just a few dollars more – or even for free. And your 25Mbps connection suddenly gets more expensive while at the same time a great deal on 10Mbps also comes with free HBO for two years. Do you really need that extra speed?

However the economics play out, one thing is certain: cable companies will come out it looking better by offering less. Suddenly rather than just 45 per cent of people having access to broadband internet, it's 75 per cent. Never mind that all of them are now getting slower access.

And another proposed change would see how the FCC measures the deployment of broadband access on a year-by-year basis rather than in terms of how close it is to a fixed goal. In other words, Comcast can say it has got 10 per cent more people onto broadband this year (amazing!) rather than have the FCC say it is still only at 24 per cent of its required goal. The difference is literally millions of Americans with slower internet access.

Why is the FCC doing this?

Back when Tom Wheeler was chairman of the FCC and there was a Democratic majority on its panel of commissioners, the watchdog decided to increase the benchmark of broadband from 4Mbps to 25Mbps.

Objectively that higher figure is a more realistic one given most internet usage: multiple people on the same connection thanks to a jump in devices, people streaming video, particularly HD video, and a massive increase in the amount of time we all spend online thanks to Netflix, Facebook, Twitter etc.

The problem was that the jump exposed so how poorly Americans are being catered for in terms of fast internet access. After the rule change, the 2016 Broadband Progress Report noted that 34 million Americans don't have access to any broadband providers.

And that the US was still massively behind other developed nations in terms of speed, roll-out and competition (16th out of 34 developed nations). Worse, just three per cent of the country had a choice of three or more providers (the definition of real competition) for speeds of 25Mbps or higher.

The results were so bad that the FCC threatened to "take immediate action" if the situation wasn't remedied. And the regulator does have the right and authority to impose some pretty strong measures against telecoms operators – measures that would cost the cable companies tens, possibly hundreds of millions of dollars and eat in their vast profits.

At the time, FCC commissioner Ajit Pai – now the FCC boss – voted against the redefinition of broadband. As did his fellow commissioner Michael O'Rielly. And now, in the era of Trump, they hold a majority, and they are looking to unravel the rules to the detriment of Americans and to benefit of the cable giants.

Pai and O'Rielly clearly decided that simply going back to the old benchmark was not going to be possible – it would be national news that the federal regulator had decided to simply slow down America's internet. And so they have cooked up a policy process that is much harder to instantly explain in order to arrive at a similar result.