Core i7 users will tell you they're faster, but forget about the >$250 premium you'll pay 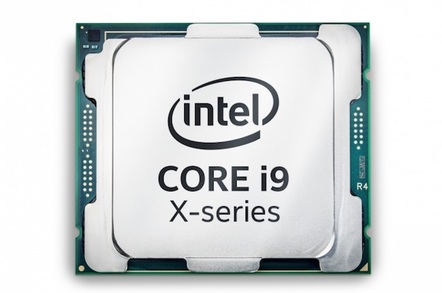 Intel's offered some more detail about the Core i9 range of desktop CPUs it announced in May.

Here's what Chipzilla has planned for us all when these chips start to go on sale. The 12-core products will appear as of August 28th. 14-to-18-core kit will go on sale as of September 25th.

Intel's pitching these new CPUs at gamers and graphics-wrangling professionals. The latter, the company says, can expect “20 per cent better performance for VR content creation and up to 30 per cent faster 4K video editing.”

If those numbers are accurate, plenty of Reg readers and the users they serve will want one of these before too long. If they insist on the top-of-the-line i9-7980 their desire will come at a cost of about $276 compared to the most expensive Core i7 currently on Intel's price list [PDF], the $1,723 i7-6950X. Lesser i7s range from $300 to $1,100 apiece, so even if users don't want the gruntiest i9 it's likely their new i9-powered machine will be more expensive than their last.

And it will almost certainly be a new machine, because the LGA 2066 socket the i9s need only appeared in motherboards as of June 2017. ®

Bootnote: We're staying out of performance comparisons to AMD for today, because without real product to test in the real world we're left with Intel's heavily-asterisked performance data, which always offers fabulous numbers. Perhaps too fabulous.