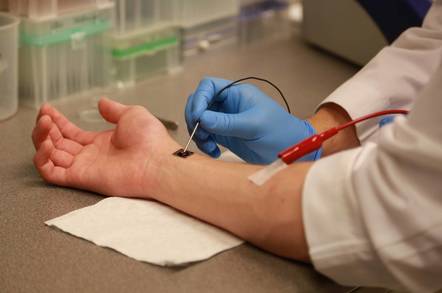 Video Researchers at Ohio State University have developed a nanochip contact patch that can reprogram nearby cells, to help repair damaged or aging organs, blood vessels, or nerve cells.

The bio-boffins have successfully used the device, which is about the size of a smartwatch screen, to turn skin cells into vascular cells in a mouse's damaged leg, which lacked blood flow. A week later, active blood vessels had grown in the mouse's leg and two weeks later, the leg's health had been restored.

The researchers also reprogrammed skin cells to become nerve cells, so they could be injected into mice with brain damage to help them recover from the equivalent of a stroke.

TNT has two components: a nanotechnology-based chip capable of delivering a payload to adult cells in a live subject and a biological cargo of specific proteins or genetic material that initiate cell conversion. Reprogramming relies on techniques involving induced neurons and endothelium.

Dr Chandan Sen, director of Ohio State's Center for Regenerative Medicine & Cell Based Therapies, is one of the 27 co-authors of the research paper and a co-leader of the study, along with L James Lee, professor of chemical and biomolecular engineering with Ohio State's College of Engineering.

Sen in a statement said the technology has reached the point where it is working successfully 98 per cent of the time. "With this technology, we can convert skin cells into elements of any organ with just one touch," he said. "This process only takes less than a second and is non-invasive, and then you're off."

A video produced by OSU's Wexner Medical Center, and embedded below, demonstrates the process. The chip is placed on an injured part of the body and a small electrical current is applied, shooting genetic code into the cells. In less than a second, cells in the area receive new marching orders and start functioning in their new role.

"The chip does not stay with you, and the reprogramming of the cell starts," said Sen. "Our technology keeps the cells in the body under immune surveillance, so immune suppression is not necessary."

Human clinical trials are planned for next year. ®