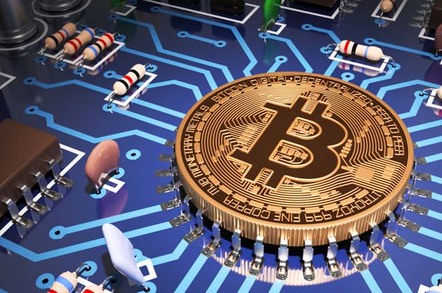 Bitcoin faces the possibility of yet another fork, a divergence anticipated by a code change proposal accepted by the developers of the Bitcoin Core client software.

A week ago, Bitcoin split in two: legacy Bitcoin and Bitcoin Cash, an alternative cryptocurrency. Holders of existing Bitcoin saw a windfall, the option to collect a matching amount of newly minted Bitcoin Cash, at many registries.

Present and future transactions require a choice between the two, assuming there's no rapprochement.

Old guard Bitcoin, meanwhile, on Tuesday celebrated community acceptance, more or less, of SegWit, a proposed code change intended to separate signature data from transaction identifier data and to increase the size of the blocks that store Bitcoin transactions.

The revision, scheduled to take effect on August 21, is intended to make Bitcoin transactions more scalable and faster. After that point, Bitcoin miners will begin rejecting blocks that fail to support the change.

Since 2015, the hard-coded 1MB block limit for Bitcoin transactions has been blamed for the long transaction clearance times and the problem has gotten worse as Bitcoin has become more popular.

With SegWit given the green light, a hard fork is planned later this year to implement the 2MB block size. Bitcoin miners will signal their acceptance through Bitcoin network, but not all are expected to go along and Bitcoin Core is planning for a split.

Several days ago, developer Matt Corallo published a pull request to the GitHub repo of the Bitcoin Core software that rejects the SegWit2x blockchain, a separate code change proposal.

The pull request, a proposed code revision, was merged into the main branch two days ago and, barring further changes, should appear in the 0.15 release of the software. The revised client software will detect when you're connecting to a SegWit2x node of the Bitcoin network and disconnect from it.

"This is basically a sign from Bitcoin Core that they do not regard SegWit2x as being the real Bitcoin," explained Ryan X. Charles, CEO of Yours.org, in a YouTube video. "...This all but assures there will be another split when SegWit2x occurs."

Presently, it appears that in a few months, if the hard fork happens, those holding Bitcoin and Bitcoin Cash could find a third currency, Bitcoin Core, in their electronic wallets. ®