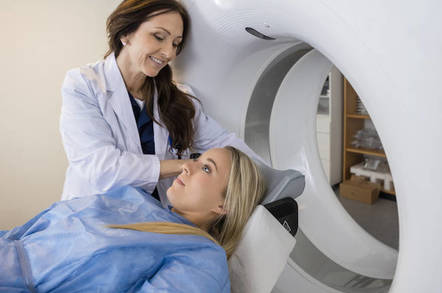 These remotely accessible vulnerabilities lurk in all of Siemens' positron emission tomography and computed tomography (PET-CT) scanners running Microsoft Windows 7. These are the molecular imaging gizmos used to detect tumors, look for signs of brain disease, and so on, in people. They pick up gamma rays from radioactive tracers injected into patients, and perform X-ray scans of bodies.

US Homeland Security warned on Thursday that exploits for bugs in the equipment's software are in the wild, and "an attacker with a low skill would be able to exploit these vulnerabilities." That's because the flaws lie within Microsoft and Persistent Systems' code, which runs on the Siemens hardware, and were patched years ago.

The patches just didn't make their way to the scanners. That means an attacker on, say, a hospital network could access the machines and hijack them, or from afar over the internet if the device isn't properly secured and left facing the public web.

"Siemens is preparing updates for the affected products and recommends protecting network access to the molecular imaging products with appropriate mechanisms," ICS-CERT added. "It is advised to run the devices in a dedicated network segment and protected IT environment."

You can find an advisory from Siemens here on what to do next if you're an administrator for one of these machines. If you can't patch immediately, you're basically told to unplug them from the network. They are perfectly capable of being run in standalone mode, apparently.

Which is good, because no one wants an X-ray scanner to go nuts at the hand of a hacker while a patient is in it. ®