Why do you cry when chopping onions? No, it's not crippling anxiety, it's this weird chemical 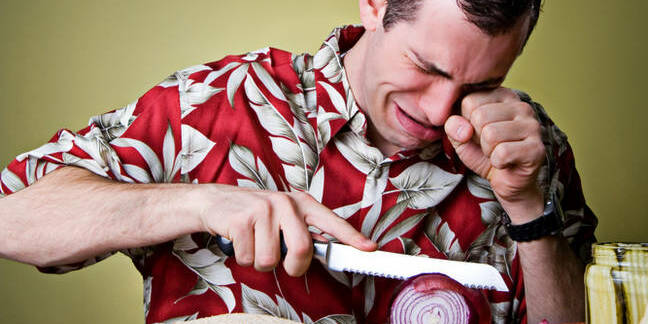 We’re all familiar with the burning, eye-watering sensation felt when chopping onions, and now we know exactly why.

The US National Onion Association estimates that the average American chows through about nine kilograms (20 pounds) of onions every year – that’s a lot of tears. We know that a lachrymatory factor (LF) agent causes our eyes to stream tears, and this is presumably produced by the onion as a natural defense mechanism to deter us from biting into the vegetable's crunchy flesh.

As the cells are destroyed, the LF is released into the air as a gas, and when it comes into contact with your eyes, it stimulates the nerves inside to give off a painful sensation.

It is known that an enzyme known as lachrymatory factor synthase (LFS) kickstarts a chemical reaction within the onion, when it's cut, to produce the LF agent, but the exact process has remained a mystery. Now, a team of chemists believe they have found the answer to this stinging question.

The researchers analyzed the structure of the active site of the LFS enzyme to work out how it combines with sulfur compounds released by the onion to produce LF. The process is complicated, and a study into the baffling biological mechanism was published last month in ACS Chemical Biology.

Marcin Golczak, lead author of the study and pharmacologist from Case Western Reserve University, told The Register on Wednesday that the enzyme is involved in the “repositioning of double bonds”, turning the chemical (E)‑1 propenesulfenic acid into the LF agent. LF is a rare class of compound – only four types exist naturally.

So now you know: when you chop an onion, it releases 1‑propenesulfenic acid, which is turned by the vegetable's LFS enzyme into syn-propanethial S‑oxide, an LF agent that makes the eyes sting when it gets in contact with them.

The new bit here, we're told, is that the enzyme repositions the double bonds of the acid to form the stinging agent.

Structure of LFS and how it modifies the structure, specifically the double bond, in the acid to form the LF agent (Image credit: Golczak et al)

Meanwhile, the US National Onion Association told The Register that to minimize tears, chill onions before you cut them. This slows the release of the tear-producing compounds.

“Also use a sharp straight edge knife, versus a serrated edge," a spokesperson said. "This will help reduce tearing because it will cause less damage to the cells of the onion. Remember: when you chop onions in a food processor, more cells are bruised than when you mince by hand – so the flavor will be stronger and could even produce a bitter taste.”

For those particularly sensitive to the irritant, House Food Goods, a Japanese food manufacturing company, produces “tearless” onions that do not create LF. The offending enzyme LFS, has been deactivated by irradiating the onion with a stream of ions.

It comes at a price, however: a pair of the fancy chemically treated onions cost about $4.30 (£3.25) – twice as much as the normal kind. The Japanese team won the IG Nobel Prize in Chemistry for its, er, breakthrough in 2013. ®