Sun's core in a real spin, but you wouldn't know just by looking at it 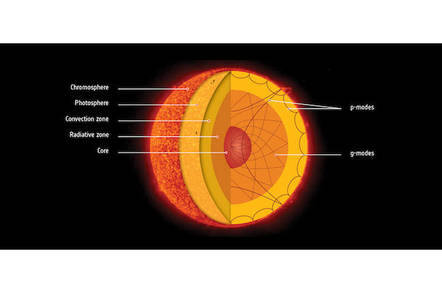 Our Sun's core is rotating four times faster than its surface.

That's the conclusion boffins have reached after peering at data from the joint NASA-ESA SOHO (Solar and Heliospheric Observatory) mission, first launched in 1995 and still turning in the science.

What SOHO found is something solar scientists have been trying to spot for decades: gravity waves behaving rather like ocean waves, with both lateral and vertical motions. The problem is that unlike the pressure waves on the surface, which are easy to spot, the “g-waves” don't leave a visible signature.

NASA's announcement quotes project scientist and Côte d’Azur Observatory astronomer Eric Fossat as saying the search for g-waves has gone on for 40 years, “and although earlier attempts have hinted at detections, none were definitive. Finally, we have discovered how to unambiguously extract their signature”.

Fossat's team analysed 16.5 years of data from SOHO's Global Oscillations at Low Frequencies (GOLF) instrument looking for the impact g-waves have on the easily-observable pressure waves on the surface.

Those p-waves take four hours and seven minutes to travel through the Sun, and on the way, they're modulated by the g-waves “shaking the structure of the Sun's core”.

Now they've demonstrated the different surface-core rotation rates, boffins can get to work understanding how the different layers interact, and what that suggests about the composition of the sun's core. ®

Bootnote: Gravity waves aren't the same thing as gravitational waves. Ocean waves and waves in clouds are examples of the former; gravitational waves are the nearly-undetectable ripples in reality so tiny you need something titanic like a black hole collision to make them observable by instruments like LIGO.