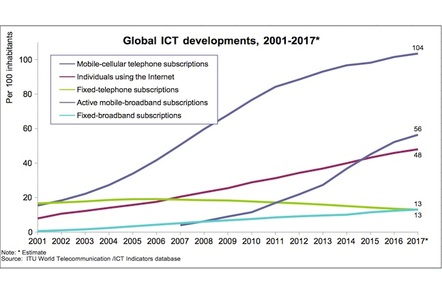 The world has more mobile phone subscriptions than people, according to the International Telecommunications Union's Facts and Figures for 2017.

The annual data dump is billed as an informed estimate about the state of the world's telecommunications services, compiled after ITU uses its authority as the United Nations' ICT agency to prod telecommunication/ICT ministries and regulatory authorities around the world for their numbers.

Among the data in the report that caught The Register's eye:

All of those new mobile subscriptions do not, however, automatically mean people use the internet. The data says that by the end of 2017 the world will have 3,578bn internet users, up from 2016's 3,385bn.

Another interesting point is the number of households with a computer, which the ITU predicts will rise by 1.1 per cent to 53.6 per cent this year. Growth of home PC penetration is has even started slowing in developing nations, too. No wonder PC sales keep slumping. ®