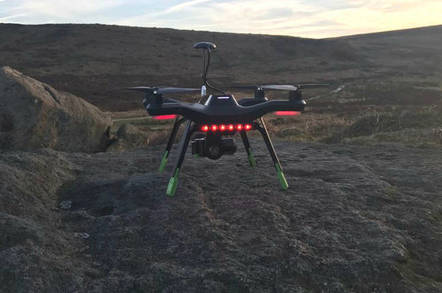 A 3D Robotics drone in flight

3D Robotics, the American drone company, has thrown open the codebase for its Solo software, in a move interpreted by some as its latest acknowledgement of Chinese rival DJI's dominance.

Solo, as 3DR's blog post on the matter makes clear, is "based on the open source ArduPilot software" launched by Chris Anderson (a one-time Wired scribe) and Jordi Munoz in 2007.

While ArduPilot is still going today, OpenSolo – as new versions of Solo will henceforth be known – is being absorbed by that project.

While 3DR's Solo-branded quadcopter was generally well regarded from a technical standpoint by the drone user community, aggressive expansion tactics by DJI and a less-than-stellar product launch saw the American firm effectively crash late last year, as Forbes reported. At its height even Richard "Beardy" Branson, of Virgin infamy, had invested in 3DR.

Earlier this week 3DR said it is integrating its Site Scan software with DJI's own enterprise offering, in a gesture seen as surrendering one of its last remaining scraps to the Chinese behemoth. As one informed source put it to El Reg: "3DR is positioning itself as a software-only company."

He added that this will give users more access to Smart Shots, which Rowse described as allowing drone users to create tracking shots – the filming technique where a camera moves along a set of rails while filming. More detail on Smart Shots is available in a 3DR blog post. ®