Thought your divorce was ugly? Bloke sues wife for wiretapping – 'cos she read his email 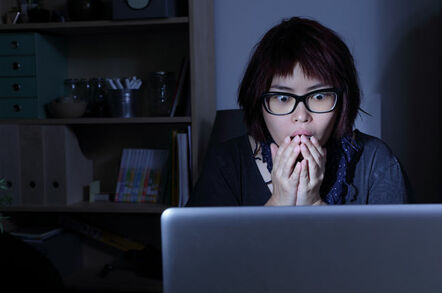 A fella in the US is suing his ex‑wife, alleging she broke federal wiretapping and privacy laws by snooping on his email during their divorce.

The case, just kicked off in an Illinois district court after six years of wrangling, pits Barry Epstein against his former spouse of 46 years, Paula Epstein, who filed for divorce in 2011. During their separation, Paula obtained, read and used his emails as leverage to get a favorable settlement, it is claimed.

Now Barry is suing Paula, alleging that by snooping on three of his email accounts in the year leading up to and during divorce proceedings, she violated the US Electronic Communications Privacy Act and the Stored Communications Act, a pair of wiretapping and eavesdropping laws.

She has denied the claims of wrongdoing.

According to the latest version [PDF] of the legal complaint against Paula, Barry says that going back as far as 2007, Paula accessed both his personal and work email accounts and set up auto-forwarding rules that kicked copies of his messages over to her email inbox.

Those messages, both personal and professional as well as attorney-client communications, were archived by Paula and shared with her divorce attorney, Jay Frank, who then used them to negotiate their divorce settlement.

"Due to the foregoing, highly offensive and objectionable conduct by defendant and Frank, plaintiff suffered severe mental anguish and could not stop thinking about this gross violation of his rights," the complaint reads.

Barry seeks damages and fees for violating the Electronic Communications Privacy Act and the Stored Communications Act, as well as for unreasonable intrusion, intentional infliction of emotional distress, and trespass to chattels.

Meanwhile, Paula Epstein made her own filing [PDF] in response to the complaint, denying the charges and claiming that she only looked at emails her then-husband had left open on their shared computer.

The case began its jury trial phase on Tuesday this week. ®