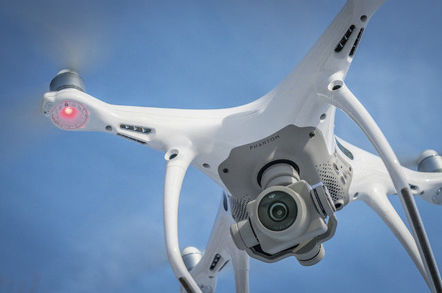 Drone manufacturer DJI has publicly challenged a pilots' union to release the disputed results of an aircraft collision study it sponsored.

Commenting on a Facebook post by the British Airline Pilots' Association (BALPA), DJI's legal veep Brendan Schulman told the trade union to stop using DJI's name in support of its position unless it released the full results of the study.

BALPA was a co-sponsor of a set of tests carried out earlier this year, supposedly to establish just how heavy a drone needs to be before a mid-air collision with an airliner or helicopter can cause problems.

In his comment, hitting back at the mildly heated discussion between the union and drone users, Schulman identified himself as speaking on behalf of DJI and said: "If you are going to use our name in connection with this thread, kindly send us a copy of the full set of research results."

He added: "Support of a specific drone policy such as registration is an entirely different matter from whether a research methodology is valid and informative."

A DJI spokesman referred us to the company's previous statements, which are consistent with Schulman's demand for the full study to be released. BALPA did not respond to our invitation to comment on the exchange.

Virtually all of the drone industry, from major manufacturers to hobbyists, levelled heavy criticism at BALPA and its fellow study sponsors, the Department for Transport and the Military Aviation Authority, for refusing to release methodology and detailed results. Only a brief summary was released publicly, containing broad-brush conclusions without the detailed data necessary to understand how the conclusions were reached.

The drone community suspects that Qinetiq, the privatised government agency which carried out the testing, simply produced a set of results that agreed with what its sponsors wanted to see. When we asked whether it would release the full results, the Department for Transport tried claiming they couldn't do so because of "security". Previously Qinetiq has ignored our invitations to respond to thoughtful public criticism of its work. We have contacted them again for this article and will update it if they respond.

Ian Povey, director of drone consulting firm Clear Vision Security, wrote in a blog post that has been shared around the British drone community: "It seems the result of this study was clearly specified prior to its commencement and as such this sets the arguments for tighter regulations back rather than moving them forwards."

The fear of the drone community, both at corporate level and among hobbyists, is that if the Qinetiq study is flawed, it may be used in future to justify more restrictive regulation on an unsound basis. Only full public disclosure will tell. ®

US buys in to QinetiQ's millimetre wave technology