We've got three years to shore up election security 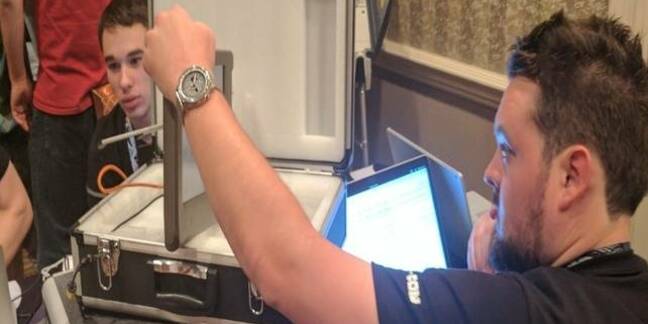 Let's get this done ... Conference attendees open up machines to examine

DEF CON After the debacle of the 2000 presidential election count, the US invested heavily in electronic voting systems – but not, it seems, the security to protect them.

This year at the DEF CON hacking conference in Las Vegas, 30 computer-powered ballot boxes used in American elections were set up in a simulated national White House race – and hackers got to work physically breaking the gear open to find out what was hidden inside.

In less than 90 minutes, the first cracks in the systems' defenses started appearing, revealing an embarrassing low level of security. Then one was hacked wirelessly.

“Without question, our voting systems are weak and susceptible. Thanks to the contributions of the hacker community today, we've uncovered even more about exactly how,” said Jake Braun, who sold DEF CON founder Jeff Moss on the idea earlier this year.

“The scary thing is we also know that our foreign adversaries – including Russia, North Korea, Iran – possess the capabilities to hack them too, in the process undermining principles of democracy and threatening our national security.”

The machines – from Diebolds to Sequoia and Winvote equipment – were bought on eBay or from government auctions, and an analysis of them at the DEF CON Voting Village revealed a sorry state of affairs. Some were running very outdated and exploitable software – such as unpatched versions of OpenSSL and Windows XP and CE. Some had physical ports open that could be used to install malicious software to tamper with votes.

It's one thing to physically nobble a box in front of you, which isn't hard for election officials to spot and stop. It's another to do it over the air from a distance. Apparently, some of the boxes included poorly secured Wi-Fi connectivity. A WinVote system used in previous county elections was, it appears, hacked via Wi-Fi and the MS03-026 vulnerability in WinXP, allowing infosec academic Carsten Schurmann to access the machine from his laptop using RDP. Another system could be potentially cracked remotely via OpenSSL bug CVE-2011-4109, it is claimed.

Greetings from the Defcon voting village where it took 1:40 for Carsten Schurmann to get remote access to this WinVote machine. pic.twitter.com/1Xk3baWdxv

The "security" of these WINvote machines is so bad. Running WinXP, autorun enabled and hard-coded WEP wifi password. pic.twitter.com/AlOiAPcRra

We're told the WinVote machine was not fully secured, and that the intrusion would have been detected and logged, so don't panic too much. And not all the attacked equipment are used in today's elections. However, it does reveal the damage that can potentially be done if computer ballot box makers and local election officials are not on top of physical and remote security, especially with a growing interest from Russia and other states. Think of it as a wakeup call.

“Elections have always been the concern and constitutional responsibility of state and local officials. But when Russia decided to interlope in 2016, it upped the ante,” said Douglas Lute, former US Ambassador to NATO and now principal at Cambridge Global Advisors.

“This is now a grave national security concern that isn't going away. In the words of former FBI Director James Comey, ‘They're coming after America. They will be back.’” ®

PS: It turns out the machines weren't completely wiped of data, leaving about 650,000 voter personal records lingering on them, apparently. Hackers were also able to find administrative passwords for the machines via Google, and Rickrolled one box.