I’d like to remind them that as a trusted TV personality, I can be helpful in rounding... 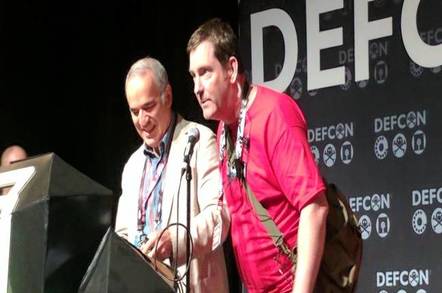 Kasparov, left, just before taking a shot as is tradition for first-time DEF CON speakers

DEF CON The world chess champion who was beaten by a computer today told the DEF CON hacking conference that we shouldn’t fear AI systems, but instead need to embrace them.

Garry Kasparov was the chess wunderkind of his day but was creamed by IBM’s Deep Blue computer in 1997. That wasn’t even close to being an AI system, he said, describing it as more of a brute force attacker, but it showed the way the technology was moving.

“It was capable of calculating two million positions a second, but was anything but intelligent,” Kasparov said. “It was about as intelligent as your alarm clock. But losing to an alarm clock didn't make me feel better.”

These days free chess-playing programs is better at chess than Deep Blue, he said, and that’s indicative of progress in computer science and engineering. But the use of software in chess has thrown up some unusual cases that suggest how mankind and machines will work together in the future.

After Kasparov’s defeat, some chess tournaments allowed humans to bring computers to the competition and the results were rather shocking. Kasparov said that the best chess players, while using computers, were actually less likely to win games than medium-level players also using PCs.

He opined that this was because the top player thought that they knew best, while a less self-confident and skilled player would recognize when the machine was giving good advice and when to go it alone.

He suggested that the same thing might be true with computer healthcare systems. It might be better to combine a nurse with an AI system than a doctor, because the qualified medic might be overconfident rather than letting a machine do the donkeywork.

The biggest danger to AI these days is regulation and red tape, as people seek to protect their jobs, he said – but this is a mistake, we're told. Yes, artificial intelligence will take over a lot of existing careers, but in time it will create more positions than it eliminates, he said.

Kasparov likened the situation to that a century ago, when the New York elevator operators union had 17,000 members pushing buttons for riders. This was an actual job – just pushing buttons – but when the union called a strike folks realized that they could do the job themselves with the help of technology.

“Twenty years from now our children will look at us driving cars and be baffled,” he said. “Look at the death rates from driving. Now, when a computer driver makes a mistake it’s big news, but look at how many die on the roads due to human drivers.”

Human stewardship of computers will always be required, he said, because while programs are very good at doing the repetitive tasks, they aren’t good at intuitive leaps. Computers can’t dream, he said, and while they can ask questions, they don’t always know which questions are the most relevant to ask, and that’s where we come in. ®