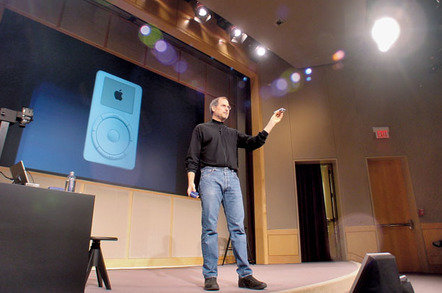 Apple has exited the standalone music player business by discontinuing the iPod Nano and iPod Shuffle.

In an unusual move, an Apple representative responded to a Reg request to confirm multiple reports of the devices disappearing for good from its website. An Apple operative told us those reports are accurate.

Those of you who want the screenless Shuffle or the touch-screen-but-app-free Nano can still find them on third party sites and there may be remnant stock in some Apple stores.

The iPod Touch runs iOS, so can also run myriad apps and is marketed as ideal for gaming. The device now comes in 32GB and 128GB variants, at US$199 or $299 respectively. 16GB and 64GB models have been discontinued. The Touch's other innards remain unaltered since 2015, suggesting Apple has little interest in further enhancements.

Standalone audio players have clearly had their day: when the original iPod launched in 2001 the state of the art for music lovers who wanted variety on the run was a portable CD player and a wallet in which to store lots of discs. The few digital music players on offer scarcely made a ripple outside a rather geeky pond.

The iPod's 5GB of storage, promised by Steve Jobs to store 1,000 songs, plus its wheel-driven interface, represented a fine alternative even though it required a then-uncommon firewire connection.

iPods started to sell like hot cakes, Apple spawned an iPod Nano using solid state storage, the Shuffle for the even more cost-conscious and/or joggers, and the Touch to tap into its burgeoning App Store.

Helping things along was the iTunes Store, which from its 2003 debut let users acquire digital music. A Windows version of iTunes arrived at the same time and gave users of the world's then-most-prevalent OS could also shop for digital music from Apple.

The various iPods gave Apple profile and credibility beyond the computing market and by 2010 it was the world's top seller of music.

By then Apple had introduced the iPhone, which could do everything an iPod could and much more besides. As the smartphone market surged, the dedicated music player market slumped. In recent years music players have become an item on a list of expected smartphone features rather than a differentiator.

On-device music has also become less relevant as music streaming services build ever-larger libraries and offer attractive prices that undercut the cost of buying music outright: a tenner a month for a service like Spotify compares very favourably to the cost of an individual album.

Apple's exit from the standalone music player market is therefore unremarkable: disconnected devices relying on desktop apps for music transfer have clearly had their day.

The devices leave a very changed music industry in their wake. Apple paid a decent royalty to many artists, but the music streaming services that are iTunes' heir reportedly offer less-than-pennies per play.

The iPod also played a role in the adoption of solid state media. The "classic" models used 1.8-inch hard drives, a form factor that reached 160GB in some iPod models. The devices pushed the limits of miniaturization, without complete success and the market for them dried up to the extent that Apple killed the iPod Classic because it could not buy enough drives to fill them! Mobile devices quickly moved to solid state storage. The rest, as they say, is history: your correspondent is today carrying a smartphone with 64GB of solid-state storage, rather less than some iPods but also more resilient. ®