An HPC product line is for life, not just for Christmas 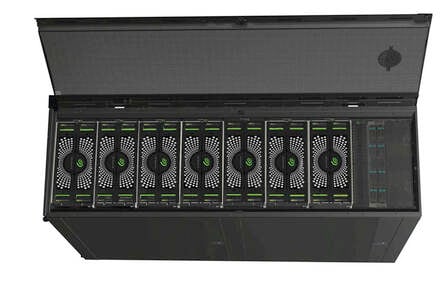 Little did we know that when we described Seagate's disk arrays business (ClusterStor and Dot Hill) as a "plaything" earlier this week, Seagate would agree, at least as far as ClusterStor is concerned, and is selling the product line to its main OEM, Cray.

The supercomputer company buys in ClusterStor product and bases its Sonexion arrays on it. Now Cray is buying the ClusterStor line for undisclosed terms and will:

Seagate and Cray will collaborate on using Seagate technologies in future ClusterStor products.

Cray president and CEO Peter Ungaro said: "Building upon our long-term strategy and the amazing growth of data, storage is becoming more important in our market. With the push to exascale computing and the explosive growth in artificial intelligence, deep learning and analytics, the ability to integrate compute and storage into supercomputing systems is more critical than ever.

"Adding Seagate's ClusterStor product line to our DataWarp and Sonexion storage products will enable us to provide a more complete solution to customers."

Seagate Storage Systems Group VP and GM Ken Claffey, who is seeing off a major part of his product set, said: "In 2012 Cray became our first OEM and has continued over the years to be our largest and most strategic ClusterStor partner. Today's announcement is really the perfect evolution of that continuing, special partnership in HPC. As the leader in the supercomputing market, Cray will be a great home for the ClusterStor, employees, customers and partners."

Cray expects the net impact of the transaction to be in the range of breakeven for 2018, and transaction closing is set for late in the third quarter.

New arrays were developed and Seagate set up a Cloud Systems and Solutions Group "going beyond our leading disk drive business to deliver cloud systems and solutions for OEMs and do-it-yourself organisations" in November 2014. It also added a Hadoop connector hoping to get a ClusterStor foothold in big data analytics.

In January 2015 Seagate head Steve Luczo, talking about ClusterStor, said: "I think that business will be on a billion-dollar run rate in a year from now."

But Seagate's big ideas met falling revenues and lost out. The Xyratex factory in Havant, England, was closed in July 2016.

Now the chickens have come home to roost as Seagate sends Steve Luczo upstairs to be executive chairman, promotes COO Dave Mosley to be its CEO and sets out to lay off 600 people.

The ClusterStor sale signifies the probable end of Seagate's upwards vertical integration ideas. The future of the Dot Hill business must now have question marks around it. Seagate is in abrupt transition, but is it merely reacting to intense short-term pressures or does it have a plan to restart its growth engine?

Mosley has been a Seagate executive for several years and has Luczo looming over him as exec chairman. Can he make a break from the failed strategies of Luczo's years and get Seagate storming ahead again? ®