UK.gov: You can't have our drone test results because... er, security 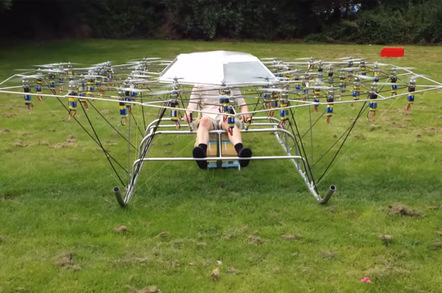 A quinquaquadcopter. This is not a realistic drone as used in the UK today

The Department for Transport has rejected calls from drone makers DJI, Parrot and GoPro to release details of its drone testing methodology on the grounds of "security".

The drone builders had challenged the government to show its working for a test it commissioned and cited as evidence for the mandatory drone registration requirement it announced earlier this week. A summary of the test was cited by the government but full details were not included.

"Some of the most alarming findings in DfT's summary are based on an object that resembles a javelin more than a drone," said Daniel Brinkwerth, of the Drone Manufacturers Alliance Europe (DMAE). The organisation's three members are DJI, Parrot and GoPro.

Privatised government brainbox farm Qinetiq carried out the testing. We have asked them for a comment and will update this article if they respond.

A DfT press officer told us that the full results of the test would not be released because of "security" concerns. We understand that the department claims to be worried that precise details of drone weights and speeds that cause damage to full-sized aircraft could get into the public domain. The department refused to put its reasons to us in writing.

Licensed drone pilot Ian Hudson told The Register: "It's disappointing that, unlike studies on drone safety in other countries, the UK's DfT has decided to claim conclusions without providing transparency on its methods. The test from the outset appeared seriously flawed; an F450 is not a current airframe and for DfT to pass it off to the media as being such comes across as dishonest."

The drone used by DfT in its test was a three-year-old quadcopter. While not unfeasibly old, the few details of the test methodology that were released included the detail that two of the four quadcopter arms were removed before it was fired at an airliner windscreen and a helicopter windscreen.

"The study's authors could not find a way to launch a 4-kilogram drone against an aircraft windscreen, so they mounted two motors, a heavy camera and an oversized battery on nylon arms. This object could never fly, much less encounter an airliner at high altitude," said the DMAE's Brinkwerth. "Researchers need access to the full test results to understand whether this is an acceptable shortcut for scientific research."

Brinkwerth highlighted a 195-page report (PDF) written by the US Federal Aviation Administration as a model of drone research. That paper, he said, "was peer-reviewed before publication".

"Its detailed descriptions of testing methodology and exhaustive test results allowed researchers, manufacturers and others to examine the data and use it to improve drone safety," he added.

Whether or not the drone testing report is flawed, it is also a fact that DJI implemented a very similar registration scheme. Though DJI welcomed that move, The Register understands that it, and the other drone makers, is worried about the impact that the study will have on future British drone regulations. Given that the data collected from the practical test was used to inform a computer model of likely drone damage, it is in everyone's interest to ensure that both the data and the model are as sound as possible. ®