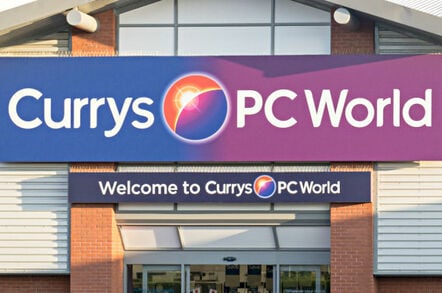 Currys PC World has been ordered not to "exaggerate the capability" of its Knowhow Cloud backup after an aggrieved UK buyer found out the hard way that he had to restore each individual file one by one.

The misleading advert on currys.co.uk was banned by the UK's Advertising Standards Authority after it ruled that "the impression created by the ad was not that the product was singularly for cloud storage, but that it provided some sort of additional security".

"This," continued the ASA, "was suggested by the claim 'Complete Security ... All your data is protected and backed up in our military grade encrypted UK based data centres'."

The advertising regulator said this meant consumers "would understand this claim to mean the product would provide additional security benefits beyond those of a standard cloud storage service".

The ad smackdown came after a Knowhow Cloud customer tried to use the service to restore his backups after a ransomware attack. Instead of the fast and convenient service he expected, however, he found that his data could only be restored if files "were individually recovered through a time-consuming manual process".

Currys tried arguing that the cloudy backup service was "not intended to cover files that were virus infected, which created a rather complex situation for restoration". They also blamed the customer, suggesting that getting caught in a ransomware attack was his own fault for having "inadequate virus protection", in the words of the ASA.

Knowhow is a trading name of DSG Retail Ltd, the company behind the Currys PC World brand. Although the ASA ordered that the advert not appear again in its current format, when we had a look at their website, we found these two key phrases highlighted by the ASA were still online:

Once backed up, your files can be accessed whenever you need them, anywhere in the world.

All your data is protected and backed up in our military grade encrypted UK based data centres. You can also secure the files on your computer, so if it's ever lost or stolen your data is safe.

We have asked M&C Saatchi, Currys PC World's PR firm, why Currys is defying the advertising regulator. We'll update this article if they respond.

M&C Saatchi has sent us a statement on behalf of Currys PC World:

“We note the ASA’s ruling and the product details are being updated as a priority.” ®