On 20,000 changes a day, its public task and beautiful, beautiful maps 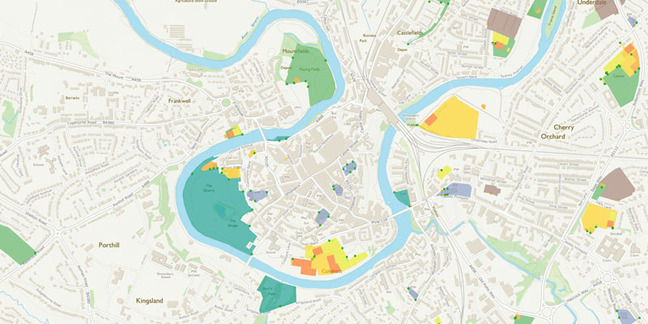 Interview The UK’s mapping agency has brought in Vodafone’s director of business intelligence Caroline Bellamy to help define and drive its data offering.

Bellamy, who is the Ordnance Survey’s first chief data officer, says her appointment on June 28 – which she also reckons might be a first for any national mapping agency – demonstrates the OS’s commitment to data.

It’s also part of the agency’s continued move to position itself as a “digital data powerhouse”, rather than simply the purveyor of paper maps.

In an interview with The Register Bellamy, formerly with Voda for almost 10 years, acknowledged that while the “public face and brand” of Ordnance Survey was still its maps, “it costs money to support what we do”.

Most of the revenue is from licensing the intellectual property rights inherent in the information it holds – direct licences, which allow customers to use OS data for internal purposes, brought in £104m in the 2015/16 financial year.

Bellamy is keen to emphasise that efforts to boost business will not affect the OS’s responsibility to maintain and update the UK’s national maps – its "public task" – or its commitments to open up some of the information it holds.

“We are looking at potential commercial collaborations, to support funding and revenue in the OS; to manage the costs in the most effective way, so it doesn’t compromise the open data we support,” she said.

“Our organisational set up aims to ensure we balance that generation of revenue and our work to build on our abilities as a global exemplar [of data use] …and the public task that we fundamentally underpin.”

And the OS's work is about more than money, she argued – it aims to encourage innovation and support the economy, for instance through the London Geovation Hub, a co-workspace for people and startups that want to experiment with location data.

“I prefer that it's not always about our revenue, it's about how data is driving our economy,” she says.

“That's a lovely privilege to come into an organisation where it's not always about the internal bottom line.”

'No longer the big stack and the big partner'

One of Bellamy’s first jobs – as well as recruiting a team to join her and chief enterprise architect Lisa Woodall – will be to set a new data strategy for the agency.

This will build on existing data capture, governance and maintenance strategies already in place at the agency, she said: “We’re not reinventing what we’re very good at today, and where we have core operations.”

It will see the OS consider moving some of its data to the cloud, she said, and continue its shift away from single, big providers.

“We don’t have the tech and infrastructure providers saying ‘You have to be on my stack and buy my software and my applications’ - it’s about tools and technologies that are relevant.

“Yes we have some traditional stacks; yes we have storage; yes we’re thinking about moving into the cloud, Azure and Microsoft... It’s clear we use a lot of the major vendors – we have an Oracle environment – but we also use internal data analytics, some are proprietary and some are open source.”

She also acknowledged that the growing community of data scientists, developers and engineers had “certain tools and techniques they love” and that the aim was to help them use that wherever possible.

'Competition is a good thing'

Bellamy might wax lyrical about the OS leading the way in its use of data - but is it also coming under increasing pressure to stay relevant, especially when faced with mapping upstarts, as the likes of Google offer the public easy-to-access apps and maps?

“I think competition is a good thing,” said Bellamy. “I would say that, being from the private sector, but I don’t think we should be afraid of competition. It drives innovation.”

She also pointed out that OS data underpins a lot of other mapping providers’ platforms and data, and that sometimes there needs to be a “core and authority view” of the land – “we make 20,000 changes a day into the environment”.

“It’s very useful as a consumer that I can use other maps, which are fantastic to get me to roughly the right area, but clearly it matters that an ambulance turns up at exactly the right address - not about generally the right area.”

But the OS isn’t resting on its laurels, and has plenty of innovative ideas up its sleeve. Earlier this month it launched its greenspaces project, it is heavily involved with the government’s work on a 5G rollout, and there are other partnerships with international organisations, and the private sector.

Bellamy revealed that one of the latest projects will be looking underground: it’s piloting work to map the exact locations of utilities suppliers, like gas and water mains or electricity cables – many of which are too old to have had their locations recorded digitally.

Earlier this month the OS held a week-long sprint with Northumbrian Water to figure out how the agency could start creating an authoritative map of pipes and cables, how deep – and how critical – they are.

The OS said it might eventually link up to augmented reality (AR) so workers could hold up a phone with a camera to “reveal” what’s underground.

Such collaborations are, Bellamy argues, the best way to get value out of the data that the OS holds. “There is no one answer; it’s about the integration and partnership around data,” she said. “The reason I’ve come in, from the public sector, is because it’s about partnership.” ®