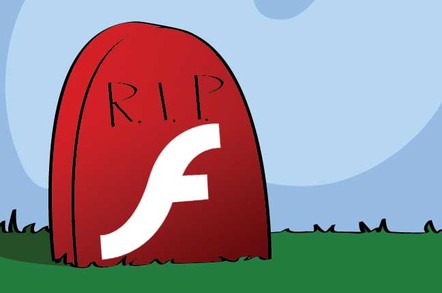 Adobe has officially set a kill date for its beleaguered Flash.

The Photoshop giant said today it plans to end support for the hacker-prone multimedia browser plugin by the end of 2020. This means no more updates for Flash Player after that date and the end of support on many browsers, including Chrome, Internet Explorer and Edge, and Firefox.

Facebook also says it will shut off Flash games by the end of 2020, and is advising developers to change their FB games over to a different format.

"Where we’ve seen a need to push content and interactivity forward, we’ve innovated to meet those needs. Where a format didn’t exist, we invented one – such as with Flash and Shockwave," said a spokesperson for Adobe, which didn't actually invent either format.

"And over time, as the web evolved, these new formats were adopted by the community, in some cases formed the basis for open standards, and became an essential part of the web."

Programmers, designers and companies whose websites still rely on Flash (Google estimates that is about 17 per cent of all sites) are being encouraged to start planning now to transition to a more modern format, such as HTML5 and WebGL, though they probably should have already done that already.

The announcement will be welcome news for security professionals and administrators, as it is one less attack vector to worry about. The notoriously insecure Flash Player plugin has emerged in recent years as the favorite target for automated exploit kits due to both its prevalence and the large number of serious flaws lingering in the code.

In the meantime, however, it will be at least another three-plus years of dutifully patching Flash Player every month and advising users to either disable or at least make Flash content click-to-play in their browser settings. ®