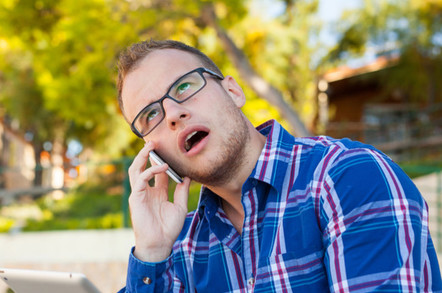 Virgin Mobile customers enjoying their summer hols have been perturbed to discover their data roaming isn't working on the continent.

A number of UK customers took to Virgin's forum pages to complain they couldn't use their roaming while elsewhere in Europe.

One complained: "I've been abroad since Monday, in Spain, and one of my accounts is not working.

"We called Virgin support three times with my other phone and tried everything they said, including wait 24hrs, remove SIM, switch on/off swap SIM to another phone and so on. Now the last verdict was that the SIM is broken, but then how come that I can receive messages and calls on that SIM, if it's broken?"

Other complained data was out of action in Italy.

One customer told El Reg he is currently abroad surrounded by happy Vodafone, EE and O2 users munching away at their data allowances. "I'm miffed, to put it politely."

He added: "It seems VM know there is a problem but they're not telling anyone about it, nor are answering or helping many users affected."

A Virgin Media spokesperson said: "We are aware of an issue affecting a very small number of pay monthly customers who are required to activate their data roaming services. We are working hard to resolve this issue, but in the meantime advise customers to check via their online account that their data roaming is activated before going abroad. If data roaming is not active then customers can call 789 from their Virgin mobile or 07953967967 and speak to a customer advisor."

Analyst firm Juniper Research estimated that globally mobile operators made $21bn (£19.4bn) in 2016, with that figure expected to plummet to $12bn (£12.4bn) next year - mainly due to roaming.