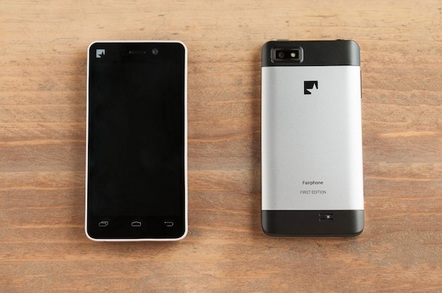 Fairphone, the effort to build a smartphone that “puts social values first” by using exploitation-free factories, conflict-free minerals and being gentle to the planet by being easy to repair, has ended support for its first phone.

The first Fairphone debuted in December 2013, offering a 4.3-inch display and Android 4.2.2. 60,000 of the phones were made and sold and by early 2015 Fairphone stopped making its first model and moved on to its successor.

While Fairphone had a trove of spares for the phone, it's run out of some parts and can no longer support the device.

“Personally and professionally, this was a bittersweet decision,” writes CEO Bas van Abel, adding that “we’ve simply reached the point where it is no longer possible to keep supporting our first phone.”

The supply chain and the relentless march of progress are to blame: van Abel says “most of the original Fairphone 1 spare parts have now been retired by our suppliers. In other words, the parts we need no longer exist.” The outfit has tried to find replacement batteries, but its small scale means “the minimum orders required to produce new batches of spare parts is beyond what we can afford.”

Van Abel says that situation has taught Fairphone it needs more cash “to be able to buy spare parts upfront, so we can continue to have spare parts available for customers in the coming years.”

The organisation's also taken a different tack with Fairphone 2 by making it modular. Van Abel admits that's not a silver bullet, but writes that “while components reaching end-of-life will always be an industry reality, the modular design will allow us to tweak individual modules to accommodate new parts. In addition, owning the design gives us direct access to our suppliers and a better overview of what’s happening in our supply chain.”