Boffins back bubbles for better bonding with beautiful belongings

AKA how to watermark 3D printed stuff with air bubbles 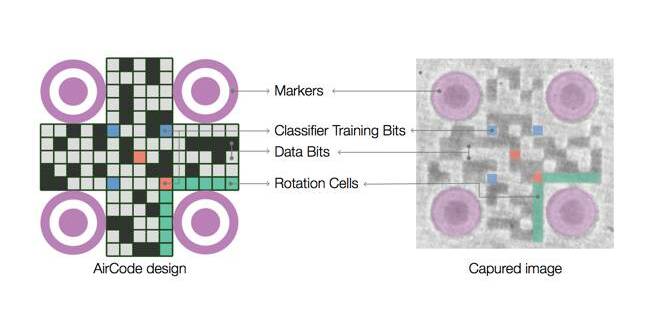 To mark and track 3D printed objects, boffins propose injecting them with air.

Air itself isn't as well suited for expression as ink, but imprisoned in a stable medium like plastic, it can be arranged to convey data.

"An AirCode tag consists of a group of carefully designed air pockets placed beneath the object surface," the paper explains. "These air pockets are easily produced during the fabrication process of the object, without any additional material or post-processing."

This approach has some advantages over other techniques. Barcodes, the researchers argue, are obtrusive and if buried under an object's surface to conceal their unsightliness, they become difficult for optical scanners to read.

RFID tags may be used but, the researchers say, these generally require a post-manufacturing process to install or affix, and typically equipment beyond a commodity 3D printer is required.

Tags printed using invisible ink may be an option, but again this requires an additional manufacturing step and such ink may fade or wear off over time.

Acoustic barcoding, in which audio signatures are embedded by adding subtle grooves to an object (as if it were a vinyl record), has also been explored. But the researchers contend this approach requires changing the shape of the object and requires physical contact to read the tags, unlike an optical camera.

AirCode, they claim, requires no costly post-manufacturing process, works with existing 3D printers, and doesn't alter the exterior shape or appearance of objects.

Fetching the encoded data is a matter of projecting light onto the object, taking a series of pictures, then processing the image files.

The authors envision AirCode tags being used to encode hyperlinks associated with information about an object. They suggest such links could even be used to retrieve the 3D source file for the object.

That circular reference has the potential to help automated assembly lines function more reliably. By providing an assembly line control system with a 3D model of the thing being conveyed, a robot arm would better be able to estimate the object's position and orientation for grasping than if it had to make those calculations from a live image.

The technique works with gently curved surfaces, but with highly curved shapes, the researchers had difficulty placing the air pockets in positions where they could be reliably read. It's not suitable for 3D objects made with mixed materials or those that are painted. It could also have trouble dealing with Disney's proposed scan-resistant material for 3D printed collectibles. ®