The Italian Jobs: Bloke thrown in the cooler for touting Apple knockoffs

Feds made Naples man an offer he can't refuse 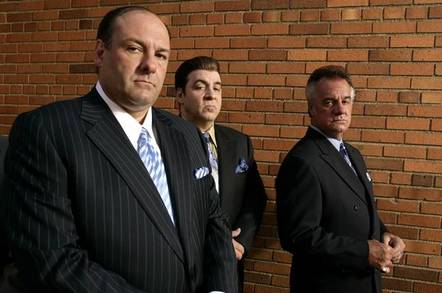 A scammer who imported fake iPods, iPads, iPhones, and Sony hardware worth $15m into America was today sent down for 37 months.

Rosario La Marca, 54, of Naples, Italy, paid $1.1m to Chinese manufacturer Jianhua Li, 42, based in Hong Kong, in exchange for counterfeit electronics resembling Apple and Sony goods. US prosecutors say that 40,000 devices were shipped to the US and sold as genuine kit to eager buyers.

In order to elude the attention of the authorities, the electronics were shipped in without logos, which were sent separately and added on after the hardware had been received. La Marca, Andreina Becerra, 32, a Venezuelan national, and Roberto Volpe, 35, an Italian national, had the goods sent to their offices in New Jersey and Florida, where the gear was suitably dressed up to look like legitimate kit.

The bogus devices were then sold online to people across the US. The sales money was funneled back to associates in Italy in batches of less than $10,000 to avoid alerting the tax authorities. The trio ran the scam from July 2009 until they were busted in February 2014. The authorities did intercept five separate shipments of goods, predominantly fake iPods, before tracking down the group, cuffing them, and charging them.

On February 22, La Marca pleaded guilty in a federal court in Newark, New Jersey, to:

After finishing his 37-month sentence, handed down today, La Marca will be put on supervised release for a year. Becerra and Volpe have also pled guilty to similar charges, while the Chinese fella Li is contesting the case. ®