Burglary, robbery, kidnapping and a shoot-out over… a domain name?! 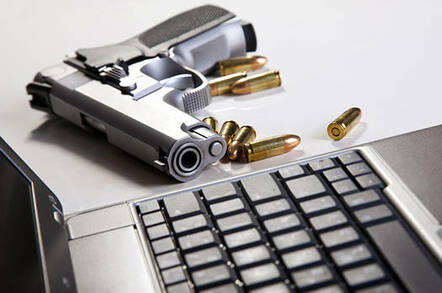 A home break-in that resulted in two men being shot – one of whom was later charged with burglary, robbery and kidnapping – was the result of a domain name dispute, cops have said.

Sherman Hopkins, 43, broke into a house in Cedar Rapids, Iowa, America, last month armed with a gun, it is alleged. Rather than making off with some jewelry or a flatscreen TV, however, it is claimed Hopkins confronted the owner – 26-year-old Ethan Deyo – and, at gunpoint, attempted to get him to transfer a domain name to an unnamed third party.

"Hopkins forced Deyo to log on to his computer and tried to coerce Deyo to transfer a domain name," a criminal complaint filed this week by the Linn County Attorney’s Office states, although it fails to say what the domain name was.

We called the police department and asked. They wouldn't tell us the name but noted it was "valuable." "We will release the name of the domain after our investigation is complete," a police spokesman told The Register.

Right now, the cops are looking into the details of the third person that Deyo was asked to transfer the name to and whether that person "had an influence" on Hopkins' alleged behavior.

One thing the police are sure about: it was no random act. Hopkins turned up with the "express purpose" of forcing Deyo to hand over control of a specific domain name, it is claimed. Hopkins and Deyo did not know one another, raising suspicions that he may have been hired by the third party to get hold of the name.

That raises more questions: why would someone take such an extremely risky approach to getting hold of a domain name?

A clue may be in what Deyo does for a living: he advertises himself as a content specialist online and sells his ability to "create engaging content for online businesses." As part of the police investigation, they are looking into whether the third party was looking to have the domain name returned to them, or whether they were seeking to grab it off Deyo.

We ran a reverse domain search and couldn't find a name registered by Deyo that was of such value that it would be worth sending someone around with a gun.

Deyo has registered a few names for a family member (variations on Deer Run Hamilton – Hamilton being in Illinois), and a few "Iowa Web Pro" domain variations. But his main EthanDeyo.com website uses GoDaddy privacy service, and presumably as a web professional he would follow standard practice and pay for the additional privacy for his client.

All of which suggests that someone knew that Deyo had control over a valuable domain, despite it not being publicly listed, and decided that threatening him with a gun to hand it over was the best course of action.

We have contacted Deyo and asked for clarification.