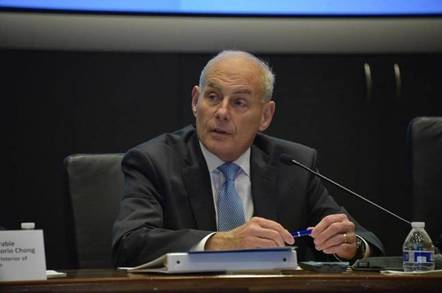 Flying into America? Don't worry about that crackdown on laptops and similar gear in your carry-on luggage. It's no longer happening. No, instead, the US has something else up its sleeve.

New screening technology in airports will sniff out any bombs in your IT kit. So says Homeland Security boss John Kelly has, although he doesn't know exactly what that tech is.

Speaking on the opening day of the eighth annual Aspen Security Forum on Wednesday, Kelly said the ban earlier this year was triggered by credible intelligence that terrorists had developed a method of packing explosives into notebooks in such a way that conventional systems couldn't detect them. The terror bastards, we're told, had hoped to detonate the bombs mid-flight, committing murder on a mass scale.

However, no one, certainly no airlines, were totally happy about that crackdown, so it was shelved in favor of scanning people's electronics with a new thing called CT. However when asked what that actually meant, Kelly was fuzzy on the details.

"It's a new kind of technology," he said [PDF]. "I don't know what CT stands for, but let me put it this way, when you go through your airport check in your bag goes through today, it goes through X-rays, your baggage checked goes through, for the most part CT technology."

Thankfully, John Pistole, the former administrator of the US Transportation Security Administration, was on hand to enlighten Secretary Kelly and explained that CT stood for computer tomography. After hearing this, Kelly called Pistole a "nerd," and got a laugh.

This chat with Homeland Security boss John Kelly about detecting bombs in laptops is something else pic.twitter.com/rEVEcmwNbv

Terrorists could have a blowout

Computer tomography, which is widely used in medicine, involves taking multiple x-rays around an object to get a clear image of what's inside, as opposed to today's top-down shots taken by airport scanners. Kelly said that he was confident that the new technology – whatever it's called – will protect aircraft and passengers onboard.

Kelly said that the laptop ban covered cabin use of electronics – but not storing them in the hold, because the intelligence community had told him that although an undetectable bomb could be made for laptops, a remote trigger could not.

He said that, given his military background, he'd been skeptical that you could pack enough explosives into a laptop to destroy an aircraft. But after seeing tests carried out on a pressurized aircraft hull he had been convinced.

Kelly said the DHS wants to see greater use of sniffer dogs at airports and will be introducing a requirement for an advanced biometric passport to be required for flights coming into the US.

He also wants to see biometric scans introduced for those crossing US borders on land. He envisaged a system whereby car drivers could be scanned by a camera and simply waved on through if their faces were on the nice-guy register. It seems he doesn't know a lot about the failure rates of such systems either.

During the Q&A section of the talk, Kelly was asked why the enhanced security measures and partial travel bans didn’t affect citizens from Saudi Arabia, Pakistan, and the United Arab Emirates, since those three countries provided the vast majority of terrorists who attacked the US.

Kelly replied that the travel ban was more to do with countries that didn't check travelers against criminal databases, whereas he was satisfied that Saudi Arabia, Pakistan, and the United Arab Emirates did do background checks before allowing their citizens to travel to the US. ®