Tapping the Bank of Mum and Dad: Why your Netflix subscription is poised to rise (again) 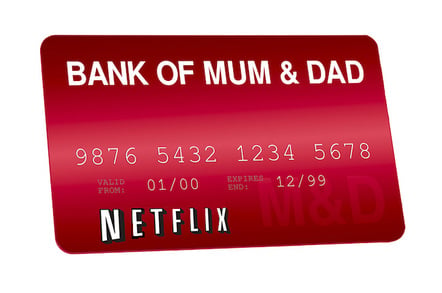 Analysis If Silicon Valley still does one thing better than anybody else, it's propping up profitless corporations, just like the Bank of Mum and Dad. Gulf states pour money into Premier League teams, but not on anything like the scale of Uber and Netflix, two examples of capital-swallowing money pits.

On Monday, Netflix warned shareholders that it would not generate cash for "many years". Netflix currently estimates it will spend $2-$2.5 billion more this year than it will receive in income. Netflix's international operations, like the UK's, have for the first time actually become profitable – and for the first time, too, there were more international subscribers (52 million) than in the US (51.9 million). That, alongside earnings growth, was enough to boost its shares. Few pay any attention to the absence-of-profit warnings any more, perhaps because they've become so routine.

But one person who did was The Information's Martin Peers, formerly the number-two financial analyst at the Wall Street Journal. Peers draws a much broader conclusion than Netflix and the media streaming business. He concludes that it's consumers who are likely to pay more for their Netflix habit.

"[Netflix] is financing its expansion by borrowing money. That strategy works in a near-zero interest rate environment like we have been in over the past nine years. But interest rates are starting to rise. To stay viable, Netflix will have to sharply raise prices in coming years," he writes in a note sent to subscribers.

There are other ways of raising money other than borrowing, such as equity issues, but majority shareholders and owners are reluctant to dilute their holdings as it takes the lustre away from that distant, glorious pay day.

At this point it's worth recapping why the Bank of Mum and Dad continues to justify vast capital expenditures on tech companies. The overall motivation is obvious: it's the hope that the company will one day rake in monopoly profits, that over time, it will become a shareholder cash cow like Microsoft, with its Office and Windows monopolies. But that hope has become more an act of faith in recent years. The modern tech giant makes no such promise. Amazon doesn't share the wealth, but instead keeps investing aggressively on several fronts. The modern tech giant doesn't pay dividends. And many don't engage in the traditional sweeteners for investors, of share buybacks and stock splits, either.

While Uber has a clear path to monopoly profits one day – by wiping out the local taxi competition and installing itself as a municipalities delivery infrastructure – Netflix's path to world domination is much more questionable and tenuous. The idea is as follows. Media was once bundled with the delivery infrastructure, so cable meant cable-acquired programming, like HBO, and Sky meant piping Sky through a dish. But broadband and consumer demands for non-linear viewing have created a swell of "cord-cutting" – meaning the media becomes decoupled from the pipes and the wires. HBO, Comcast and Sky have had to disaggregate themselves and make their material available as just another OTT service like Netflix. Netflix comes in and cleans up, the argument goes, because of its brand and reach: it becomes a kind of "media utility". It would then duke it out for world domination with that other "media utility", Google's YouTube.

It's a plausible scenario, and it explains the power struggles over both "net neutrality" in the US, and the audacious land grab for TV rights put before the FCC last year. (See The inside story of Google's plan to pwn the TV biz).

But there's one fascinating wrinkle.

Netflix has become known for investing heavily in big-name series. This was expensive and unpopular with some analysts, but made Netflix a must-have, and diminished its dependence on movie studios. This year, Netflix has vowed to spend $6bn on original content. But what isn't so well known is that it has been cancelling them, too. High-profile casualties include one of its best dramas, the swampy family intrigue Bloodlines. The Wachowskis' Sense8 was cancelled after Netflix spent almost $100m. Netflix CEO Reed Hastings explained it like this: "Our hit ratio is way too high right now."

One research firm, Ampere, attempts to measure the "quality" of TV, something which may strike you as a perpetual pub argument, something that can never be calculated empirically to anyone's satisfaction. But it's of great interest to shareholders who want to know how wisely (or not) Netflix is spending their money (and that $2.5bn that disappears every year is other people's money, remember). Even a rough estimate is better than no estimate. And Ampere calculates that once you look past the big investments, the quality of Netflix's Originals catalogue has actually declined by 4 per cent over two years.

And beyond the Originals, there are the acres of dross, a TV and movie graveyard stretching to infinity (and beyond). Making great TV is risky and expensive. Maybe the "New Cable" looks a lot like the Old Cable after all. ®