That's the Google 'Transfer Appliance', to get data out of your bit barn and into its cloud 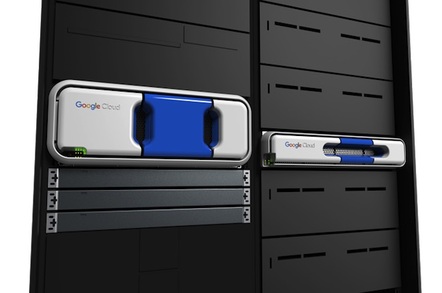 Google's started a Snowball fight with Amazon Web Services by announcing a “Transfer Appliance” to get data out of your data centre and into its cloud.

AWS already has just such a machine: its Snowball is a ruggedised storage appliance with 80TB capacity that the cloud colossus sends to your premises so you can load it up full of data. Once loaded, the Snowball rolls back to your preferred AWS bit barn where its contents are uploaded direct to the cloud without all the nasty latency and cost it takes to upload data over wide area networks. AWS will also send a loaded Snowball back to your bit barn.

Google's now decided its customers need the same thing, at least for uploads to the cloud, so has revealed 100TB/2U or 480TB/4U devices designed to nestle into 19" racks. Both boxes' capacity just about doubles if you compress data.

As with AWS' Snowball, Google lets you keep the boxes on-premises for a limited time, then send them back to have their contents uploaded.

Google's description of the Appliance suggests it is a vanilla NAS that requires a “capture utility” to drive. Then also explains you need to pre-provision a cloud storage bucket before sending the Appliance back to Google. You'll also need a “Rehydrator” running in the Google cloud to decompress data once the Appliance reaches the Alphabet subsidiary's bit barns.

Transfer Appliances' 100TB and 480TB capacities put them ahead of AWS' 50TB and 80TB Snowballs, but behind Amazon's 100-petabytes-in-a-truck Snowmobile. Google's also only in beta, while Snowballs are a live option for 11 AWS regions plus its government cloud.

But at least Google is now able to point to matching another rival's services, as it seeks to shake off perceptions it is playing on price while trying to prove its technical chops. ®