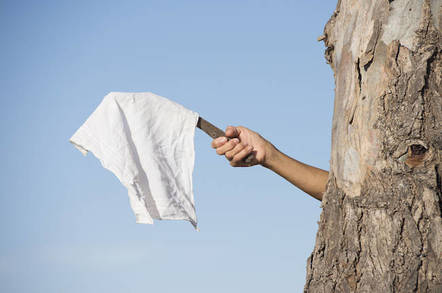 The CEO of Qualcomm says he hopes to settle his company's licensing dispute with Apple out of court.

Speaking at a conference in Aspen, Colorado, Steve Mollenkopf suggested the SnapDragon chip designer would push for a settlement rather than rely on a jury to determine if Apple was liable for back payment of royalties.

"There's not really anything new going on," Mollenkopf was quoted as saying.

"Those things tend to get to resolved out of court and there's no reason why I wouldn't expect that to be the case here."

Qualcomm has been locked in an increasingly ugly legal battle with Apple over the prices it charges for patent licenses. Apple claims Qualcomm is gouging customers by charging royalty fees on patents they don't use. To back up those claims, the Cupertino giant has sued Qualcomm for $1bn and instructed partners not to pay licensing fees.

Meanwhile, Qualcomm has countered by filing patent infringement charges against Apple and asking for an import ban on the iPhone. The chip designer claims that Apple's refusal to pay royalties has already cost it hundreds of millions of dollars in revenues.

"We have a contract, and people want to pay less on the contract, and there is a lot of worldwide maneuvering involved," Mollenkopf said. "Our perspective is pretty simple – that contract has been in existence for a long time. There's not really anything new going on."

While Mollenkopf's statements will raise eyebrows, speculation that Qualcomm and Apple will arrive at a settlement is hardly a surprise. Despite all the bluster and allegations, Apple does rely on Qualcomm designs for its flagship iPhone and iPad products, and Qualcomm cannot afford to lose a major customer like Apple at this time.

The pressure is on each company's executives and lawyers to negotiate the settlement deal before the case goes to trial. ®