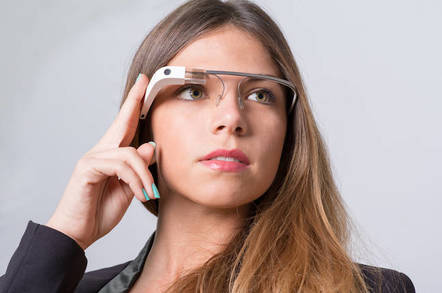 Google Glass, the Chocolate Factory's shotgun wedding between technology and fashion, debuted to great fanfare on skydivers at Google IO 2012, launched with timidity in May, 2014 and collapsed under the weight of ridicule and naive expectations in January, 2015.

It was a humbling flop, made more so by prognostications that sales could reach 10 million units by 2016. Google never released sales figures for its $1,500 folly, but various estimates put the number somewhere in the six figure range.

Google described the end of Glass euphemistically as a "graduation," and hinted that its unloved hardware would return some day.

That day has now arrived. Google Glass has been reborn as Google Glass Enterprise Edition, following a prolonged period of testing and rehabilitation.

"We first saw signs of Glass' potential for businesses in the Glass Explorer days," said Jay Kothari, Google Glass project lead, in a blog post. "As we said when we graduated, we'd been seeing incredible developments with Glass in the workplace. Now the Glass product team is back at X, and we'll be collaborating with the Google Cloud team and our partners to help customers across a variety of business sectors make the most of Glass."

Instead of presenting consumers with eyewear that offered some functions of an Android phone and trusting that users and developers would figure out what to do with the face-mounted screen, Google has focused on providing companies with hardware suited to work environments where users' hands may be occupied.

There's even a clear statement of purpose: "Glass is a hands-free device, for hands-on workers."

No longer is it a single piece of hardware that combines lenses, a frame, a display screen, and a CPU; instead it's a processor combined with a display that can be clipped onto existing eyewear.

And Google is relying on a network of partners, focused on specific industries, to handle corporate sales – at a call-to-find-out price point.

Kothari cites agricultural machinery maker AGCO and shipping firm DHL as examples of businesses that have found a place for Glass. At Dignity Health, he says, doctors have been using Glass with an Augmedix transcription application to capture discussions with patients instead of taking notes by hand.

In a phone interview with The Register Gartner research VP Mark Hung said: "My doctor has been using Google Glass with me for the past few years, so I've seen it in action,. I think Google repositioning Glass for the enterprise makes a lot of sense. People didn't really understand how to use augmented reality in a consumer setting."

Hung said there's now a match between the product and its intended application. "What doomed Glass in a consumer setting was it wasn't clear what it was intended for," he said. "And that opened up a Pandora's Box of possible abuses." ®

How an augmented reality tourist guide tried to break my balls

Something for the Weekend, Sir? ... and displayed the results for everyone to see