Mayak bird so bright it may outshine Venus, Jupiter 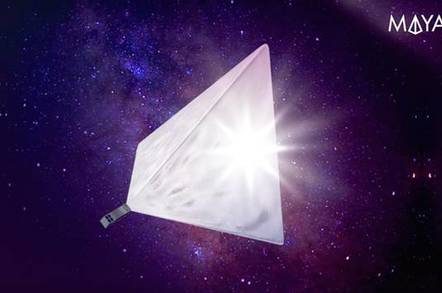 Skywatchers are going to see a new light in the heavens this week after the successful launch of the Russian satellite Mayak this past weekend.

Mayak, the Russian word for "beacon," is a standard tiny CubeSat probe. It will deploy 170 square feet (16 square metres) of reflective Mylar material in a pyramid shape that will reflect the Sun's light as it tumbles through its orbit.

The satellite will be brighter in the sky than the International Space Station (ISS) and may even appear brighter than Venus or Jupiter. Basically, a sorta crap version of the Icarus space laser in James Bond low-point Die Another Day.

Russian cubesat 'Mayak' to launch Jul 14 will deploy a reflector that may be as bright as mag minus 10. Astronomers likely to be annoyed.

The satellite is one of 73 new orbital platforms lofted by a Russian Soyuz rocket on Friday that have been deployed over three separate orbits. Mayak is circling the planet at about 600 kilometres (372 miles) high and will be moving in a pole-to-pole orbit.

Mayak is a crowdfunded effort by the Moscow Polytechnic University, which raised over $34,000 to get the satellite aloft. An Android app has been built that allows them to track the progress of the satellite in the few months that it'll stay aloft.

But there's more to this than orbital willy waving by satellite designers – there are some serious goals. Mayak's movements will be measuring the density of the atmosphere and its effects on the Mylar envelope and the satellite's progress.

It's hoped that the data will assist with the design of larger devices that can be attached onto larger pieces of space junk and used to bring them down from orbit so that they can burn up in the atmosphere. Such junk is a growing issue and has caused its own problems for the ISS.

But that's a fair way away yet. In the meantime, enjoy the occasional glimpse of something new in the sky, while it lasts. ®