Google unleashes 20m lab-created blood-thirsty freaks on a city. And this is a good thing, it says

Infected sterile males will help kill off the population 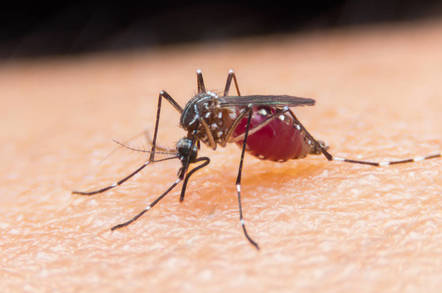 Don't panic: it's to test fighting diseases like Zika, dengue and chikungunya.

The Debug Project will be the biggest US study to set free mosquitoes infected with Wolbachia, a common reproductive parasite.

The idea is that the infected mosquitoes will try to mate with wild females, but the eggs laid will not hatch, and the mosquito population will decline over time.

An automated mosquito mass rearing process has been developed at Verily. They have also been sorted by sex, and algorithms will control on-the-ground devices that will release and distribute the male mosquitoes evenly over two neighborhoods, each stretching 300 acres in size.

A million mosquitoes will be released over a 20-week period. A similar pilot was performed by CMAD and MosquitoMate back in 2016, but with the help of Verily, the new experiment involves 25 times more mosquitoes.

Aedes aegypti was first spotted in central California in 2013. It’s an invasive species originating in Africa, but has since spread to other tropical and subtropical regions.

It is an effective vector for carrying diseases like dengue fever, Zika and chikungunya. The viruses are blood-borne and are reproduced in the mosquito’s stomach and spreads when a victim is bitten.

Aedes aegyptis are likely to bite several times before they are full, increasing the chances of the disease spreading. Females lay a cluster of up to 200 eggs near water, up to five times during its lifetime, making it easy for the population to increase rapidly. ®

PS: Yeah, we know – only females bite. We couldn't let the headline pass, though.

If it sounds too good to be true, it most likely is: Nobody can decrypt the Dharma ransomware

Not even data recovery companies

It's all in a lucrative day's work for Red Mosquito

A Mozzie free summer? No chance