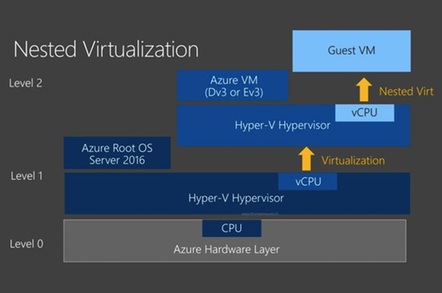 Microsoft’s added a new instance type to Azure and the ability to run nested virtualization.

The new Dv3 VM instances run on either the Broadwell E5-2673 v4 2.3GHz processor or a Haswell 2.4 GHz E5-2673 v3 and between eight and 64GB of RAM. Whatever the CPU you use, Windows Server 2016 is also under the hood along with Hyper-V and its ability to run nested virtualization – a VM inside a VM. You'll also be renting a virtual CPU rather than a physical core, a a change as Microsoft announced in April 2017. Microsoft says doing so means it can put get the best out of those Haswells and Broadwells. That the move to vCPUs has enabled nested virtualization for the first time suggests this new offering is the proof of the pudding.

Microsoft reckons cloudy nested virtualization is handy for those who want to simulate on on-prem Hyper-V setup inside Azure, or fans of running containers inside VMs. The latter scenario is often suggested as a fine way to adopt containers without forcing sysadmins to wrap their heads around unfamiliar tools.

Nested virtualization may also be handy for those who like to save money, as the Dv3 instances cost up to 28 per cent less than their predecessors.

The advent of the new instances have also seen Redmond decide that some current D-series VMs – the high-memory D11-D14 range – need a new name to distinguish themselves. They're therefore reborn as the Ev3 range and offer between 16 and 432GB of RAM.

For now, the new Dv3 instances are offered in Azure's US West 2, US East 2, Europe West and Asia Pacific Southeast bit barns. ®