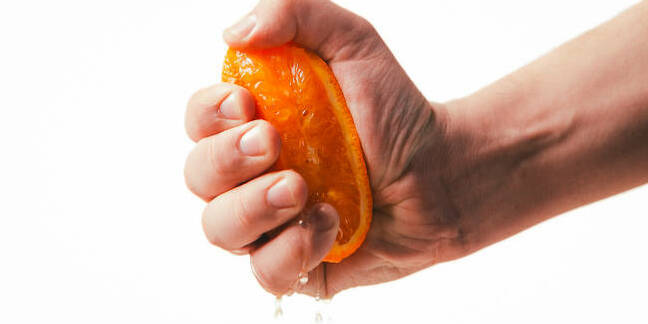 Internet-tethered juicer maker Juicero is axing 25 per cent of its staff as the startup tries to shake off its status as a Silicon Valley punchline.

Employees were told this morning that the San Francisco startup would not only shed staff, but also try to cut the price of its internet-connected juice-extractor in order to go beyond the niche market of early-adopter techies and into the wider world of people who can't fork over a quarter of their paycheck for juice.

In the letter, CEO Jeff Dunn tells Juicero workers that "the current prices of $399 for the Press and $5 to $7 for produce Packs are not a realistic way for us to fulfill our mission at the scale to which we aspire."

"We are not alone in this journey. Many innovative products, from the Keurig and Nespresso coffee makers to even the microwave oven, started out expensive," Dunn wrote. "Over time, scale delivered manufacturing efficiencies that lowered the costs, and we expect Juicero to follow a similar trajectory."

But without the $399 haul from each juicer sold, there will in turn be less money to pay staff, and as a result the company said it would have to cut 25 per cent of its ranks, mostly in the marketing and sales departments.

"This requires a more focused investment on product development, manufacturing, shipping and improving our sourcing of organic produce," Dunn said of the plan.

"As a result, the leadership team and I, along with the board, have made the difficult decision to reduce staffing levels so that we can focus our resources on delivering these objectives."

In addition to the layoffs, founder Doug Evans is stepping down from day-to-day operations with the company and will serve as a member of the board of directors. Evans handed the CEO position off to former Coca-Cola exec Dunn last year.

The change comes as Juicero continues to try to move on from this Spring's embarrassing realization among the formerly adoring tech press that the $399 Juicero machine was no more effective at extracting juice from the $7 produce packs than a set of human hands. The press is questioning whether investors were misled when they put $120m worth of backing behind the startup.

Lest you think Juicero has turned the page on that episode, Dunn made a point of referencing it in his memo, commending some of the soon-to-be-former employees for their handling of the matter:

"It was frustrating to read that something we always knew about, and that our customers simply aren't interested in doing, was somehow new and relevant. But you overcame the distraction and I appreciate your unflappable focus." ®